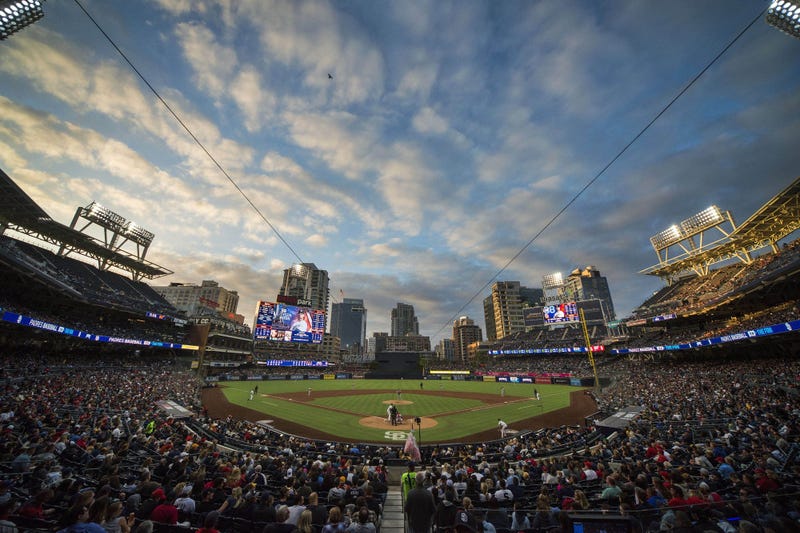 Here are nine things you need to know about the 2019 San Diego Padres for Opening Day:

Opening Day is sold out!  If you don't already have a ticket, you are out of luck at the box office at Petco Park.  This is the earliest Opening Day sellout in Padres' history.

If you are looking for a ticket on StubHhub, there are a few singles on there.  Ticket sales blew up after the Manny Machado signing and demand for seats for the opening home stand is through the roof.

— San Diego Informer (@sandiegoinforme) March 27, 2019
Number Two
Manny Machado is a Padre.  This offseason, the baseball world buzzed over where Manny Machado was going to end up.  Would the Dodger land him?  Would a big market club swoop in and hand him a king's ransom?  Well, a team did swoop in and hand him a fortune, and much to the shock of the rest of the baseball world, it was the San Diego Padres that gave him the biggest free agent deal not just baseball, but North American sports history at the time.  He is a perennial All-Star in his prime, who will anchor the left side of the Padres infield for years to come.

Eric Lauer will duel Madison Bumgarner on Opening Day.  Eric Lauer won the nod from Andy Green to take the mound for the Padres to begin the season.  It is a big honor for such a young pitcher who made his big league debut in 2018.  He was a first-round draft pick for the Padres coming out of Kent State University.  He stands 6 feet 3 inches tall and weighs 205 lbs.  Fun fact: he was originally drafted by the Blue Jays in 2013 in the 17th round but chose to go to college instead.

— San Diego Padres ⚾️ (@PadresInsider) March 24, 2019
Number Four
Fernando Tatis Jr. will be on the opening day roster.  Tatis Jr. is one of the brightest stars in the Padres minor league system.  He is the son of former big leaguer Fernando Tatis.  Tatis will be the youngest player on the roster at barely 20 years old.  He is the number two prospect in all of baseball right now.

Fernando Tatis Jr. is reportedly headed for the Padres' opening day roster at just 20 years old. He insists he's more than ready to be a main face of baseball's new generation https://t.co/eG9dNo9mM0

There are some new faces for the Padres coaching staff this year.  The Padres added a new bench coach for 2019.  Rod Barajas joins the staff after three great seasons leading the Padres' Triple-A affiliate in El Paso, where they won three straight PCL division titles.  His experience working with the players he had in the minor leagues will be a huge benefit for the major league ball club. Damion Easley joins the club working with infielders and as assistant hitting coach, working with Johnny Washington, who now takes over as the Padres hitting coach this season.

San Diego will say a hello on Opening Day and also begin to say goodbye to an old friend.  Former Padres skipper and current Giants manager Bruce Bochy will retire at the end of the 2019 season.  The future Hall of Famer has been to four World Series, leading the Padres to the Fall Classic in 1998, and San Francisco to the title in 2010, 2012, and 2014.  When Bochy became the manager of the Padres in 1995, he was just 39 years old and was the youngest manager in the National League.  He still lives in San Diego in the offseason.

Bruce Bochy will manage his 25th and final MLB season in 2019. His biggest fans might be his peers, writes @SamFicarro https://t.co/3VIVVdhRWq

The biggest Opening Day party will be in the East Village.  Make sure you stop by and say hello to 97.3 The Fan for the 9th annual East Village Block Party.  We will be setup in front of Social Tap on J Street.  Dan Sileo and John Kentera will broadcast live on 97.3 The Fan.  Randy Jones and Ruppert Jones will be signing autographs as well.  Sign up to win a pair of tickets to see the Rolling Stones and a chance to watch batting practice with Tony Gwynn Jr. on the field at Petco Park.

The @eastvillagesd is stepping up to the plate with the 9th Annual 2019 East Village Opening Day Block Party on Thursday, March 28th AND Friday, March 29th vs. the San Francisco Giants! Stop by the @nbcsandiego & @Telemundo20 booth for your chance to win a VIP studio tour. pic.twitter.com/ZgpAxneLIx

Parking will tough.  Get there early for your best chance to find parking near Petco.  There are many parking lots and structures, but the game is sold out, so parking will be at a premuim.  Lyft and Uber are options as well.  Your best bet is to use public transportation on Opening Day.

There are lots of improvements to Petco Park.  Make sure to get there early to see all the offseason enhancements at Petco Park.  Try a Swinging Friar Ale, or check out the new premium seating areas.

The @Padres have invested $54M in Petco Park since 2012 and it shows. Got a sneak peak of the new amenities added this year for the fans. Can't wait for Opening Day on Thursday and help celebrate 50 years of Padres baseball! #bestballparkinMLB pic.twitter.com/oIWzQYX7O1