By Sam Masterson and The Associated Pres

ARNOLD, Mo. (KMOX/AP) — A nightmare that began at a family Thanksgiving gathering near St. Louis, has finally had a miracle ending nearly a year later.

Kate Olson of New Hampshire was visiting relatives in Arnold, Mo. last Thanksgiving when her golden retriever, Walter, slipped out of his collar and took off.

She stayed in St. Louis for a few weeks hoping to find him. Although eventually returning to New England, she never gave up on him. She printed fliers and took trips back to St. Louis when she got a hot tip about a Walter sighting. 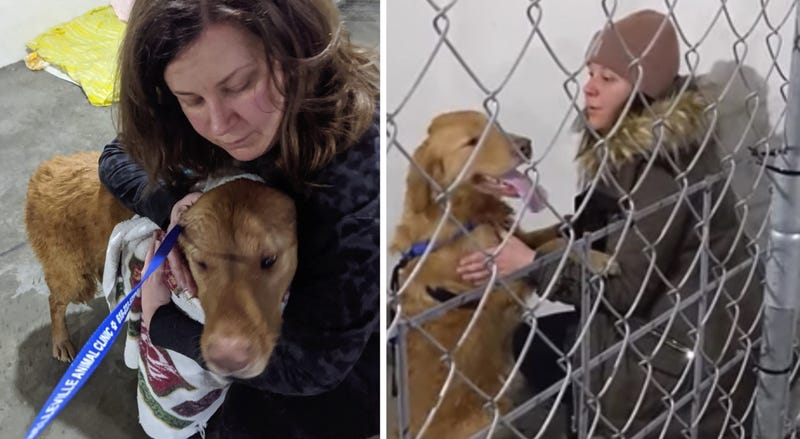 Olson estimates she spent about $1,000 in her search.

She also created a “Where’s Walter?” Facebook page and enlisted animal rescue groups in the search.

And on Friday, Olson finally got a call she was waiting for. It was from a social-media based pet group called Lost Paws Trapping. Olson immediately got on a plane and was reunited with Walter Friday night.

“He has been such a little love,” Olson said. “He is the same sweet boy he was before and maybe even sweeter because he has missed getting loved on!”

You can see video of Olson and Walter's reunion in the video at the top of this page, courtesy of Lost Paws Trapping. A post on their Facebook page shows video of Walter finally being "trapped." He was apparently living in the woods for nearly a year.

One of the group's organizers wanted to thank "the community diligently reporting sightings and fighting the urge to capture a dog in survival mode."

"John (owner at Perma Jack) made this reunion possible. He granted us permission to monitor his property and his hospitality made it possible to build and set the trap so quickly," the organizer stated.

music
Watch Ludacris stay fly and get his pilot license
sports
Free agent WR Allen Robinson likes tweets linking him to Jets
music
Flo Milli makes sure you never look at Dora The Explorer the same with new 'Back Pack’ video
sports
One NFL coach says next week’s roster cuts will be a ‘massacre’ around the league
i'm listening
Demi Lovato is 'full of peace,' celebrating her body and rebuking diet culture
news
59 soldiers guarding the US Capitol sickened by moldy, undercooked food