NEW YORK (WCBS 880) — An ICU nurse from Queens became the first person in New York, and possibly the country, to get the first dose of Pfizer's COVID-19 vaccine on Monday.

It's a historic day for New York City and the country in what's hoped to be the beginning of the end of the pandemic as hospitals begin rolling out the vaccine to essential frontline personnel.

Sandra Lindsay, a critical care nurse at Long Island Jewish Medical Center, was the first person in the state to receive the vaccine.

The event was captured on camera and Gov. Andrew Cuomo attended the historic moment virtually.

Before getting the first dose, Cuomo thanked Lindsay for all the work she had done throughout the pandemic.

"I know how horrific it was, it was a modern day battlefield and that's why the word heroes is so appropriate for what you did," Cuomo said. "You put your fear aside and you stepped up every day to serve others and you did it magnificently well."

Michael Dowling, president and CEO of Northwell Health, called it a "special moment" and declared, "We will beat this, we will win."

"This is what everybody has been waiting for," Dowling said.

Cuomo could be seen smiling from ear to ear as applause and cheers erupted after Dr. Michelle Chester, director of employee health services at Northwell Health, gave Lindsay the shot. 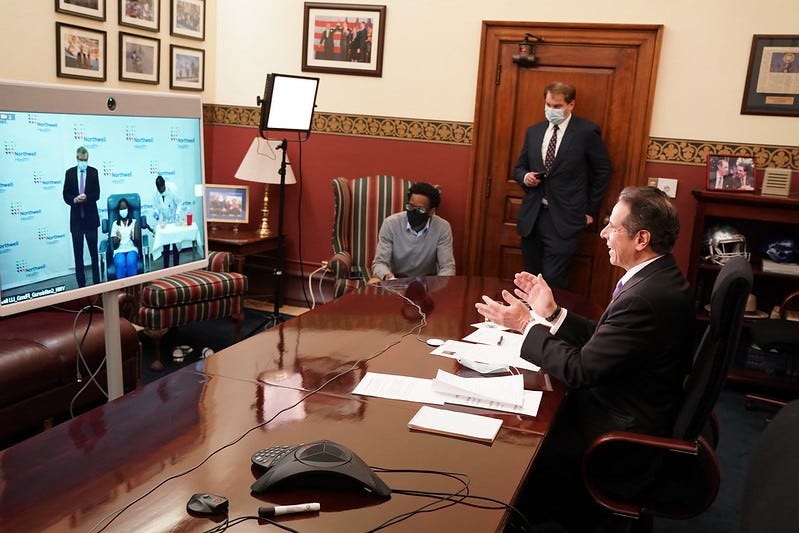 "Sandra, you didn't flinch. I take it that Dr. Chester has a good touch?" Cuomo asked the nurse.

"She has a good touch and it didn't feel any different from taking any other vaccine," Lindsay said, which prompted the governor to later declare, "When my time comes I want Dr. Chester, I like her style."

After getting the shot, Lindsay said she was feeling well

"I feel hopeful today, relieved, I feel like healing is coming. I hope this marks the beginning to the end of a very painful time in our history," Lindsay said. "I want to instill public confidence that the vaccine is safe."

The governor said he hopes this moment gives Lindsay and her colleagues a sense of security, safety and confidence in doing their job.

Cuomo said the vaccine is the weapon that will end the war.

"It's the beginning of the last chapter of the book," Cuomo said, adding that the state is deploying the vaccine statewide.

About an hour later, Dr. Yves Duroseau, chair of emergency medicine at Lenox Hill Hospital, became the second Northwell Health employee to get the vaccine.

"Both Dr. Duroseau and Nurse Lindsay have worked tirelessly to ease the suffering of COVID-19 patients since the virus outbreak began in New York 10 months ago," officials said. "It is their hope that their willingness to be among the first to be vaccinated in the region will serve as an example to the general public to take advantage of this life-saving treatment."

It's finally a light at the end of the tunnel, says New York City Mayor Bill de Blasio.

"Because as each and every New Yorker is vaccinated, it is one step closer to ending the coronavirus era," de Blasio said while speaking at Sunday church services in Brooklyn.

An office building across from City Hall has become the city's vaccine command center set up to oversee the distribution of the doses and answer questions about the safety of the vaccine.

Next in line will be nursing homes. Walgreens and CVS will oversee vaccinations in those facilities starting Dec. 21.

Cuomo is encouraging New Yorkers to take the vaccine to bring an end to the pandemic.

"The vaccine only works if the American people take it. They estimate we need 75% to 80% of Americans to take the vaccine for it to be effective so every American has to do their part," Cuomo said, adding that it will take months, possibly June, before the vaccine hits critical mass. "This is the light at the end of the tunnel, but it's a long tunnel."

Dowling urged the public to continue to comply with safety standards, such as mask wearing and social distancing, as the vaccine is distributed over the coming months. "You have to do both if we're going to be successful here," Dowling said.

Nurse Lindsay echoed Dowling's advice saying, ""There's light at the end of the tunnel but we still need to continue to wear our masks, to social distance, I believe in science, as a nurse my practice is guided by science and so I trust science." 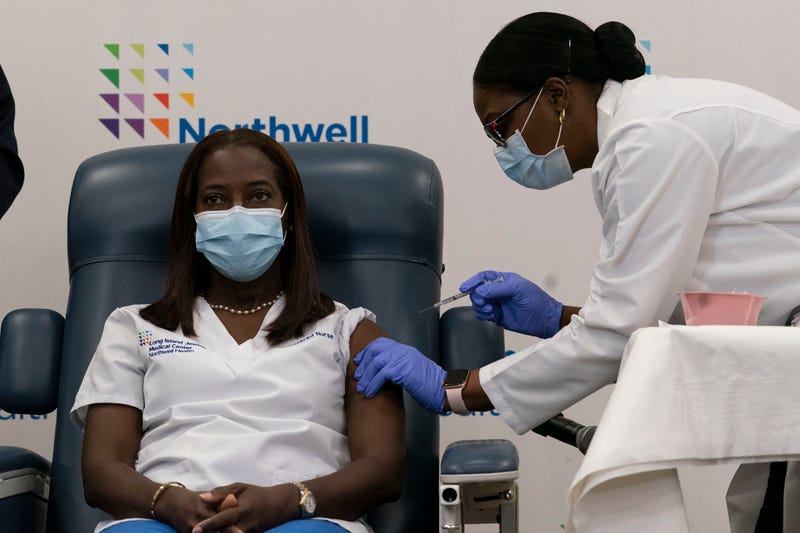 New York state is receiving 170,000 initial doses of Pfizer's vaccine followed by 346,000 doses of Moderna's vaccine, if and when it's approved by federal regulators.

The arrival of the first doses come at one of the darkest times in the pandemic with New York state reporting over 10,000 new coronavirus cases for the fifth day in a row Sunday as hospitalizations continued to climb.

The number of patients in intensive care decreased by 20 to 1,009, while the number of intubated patients rose by four to 567.

Daily deaths surpassed 100, with 106 more people dying in the state. The death toll since the pandemic began is now 27,785.