It is estimated that almost 2 million New York City residents, or approximately one in four people, will face hunger this year.

In a normal year, New York City would see over 25 million visits to soup kitchens and food pantries by individuals and families to meet their basic human need for food. That number may triple because of the pandemic this year.

Noreen Springstead, the executive director of WHYHunger, a not for profit NYC-based organization working to end hunger and poverty, says we’re facing a crisis “of epic proportions.”

In an interview with WCBS 880 preparing for this year’s Hungerthon radio fundraiser Springstead said, “I think the pandemic has been illuminating to just how close people were living to the edge of being on a food line.”

Each year for the past four decades WHYHunger harnesses the power of local radio stations like WCBS Newsradio 880 to raise funds for their efforts and raise awareness to the fight against hunger and poverty.

Springstead, a guest on this week’s 880 In Depth podcast said, “Our work is more important than ever because the human need has increased dramatically.”

Springstead joined WHYHunger partner Dr. Melony Samuels from The Campaign to Fight Hunger in New York City, a Bed-Stuy, Brooklyn-based food pantry that has been on the front lines for more than two decades.

Dr. Samuels says her organization has seen a 75% increase in people coming to seek help this year because of the pandemic. In the first three months of the COVID-19 crisis they were literally running out of nutritious food to hand out to people in need.

“It had gotten to a panic stage” and Dr. Samuels says these next few months could be just as difficult.

“January, February, and March when no one thinks about hunger, that’s when it really hits,” Dr. Samuels said. 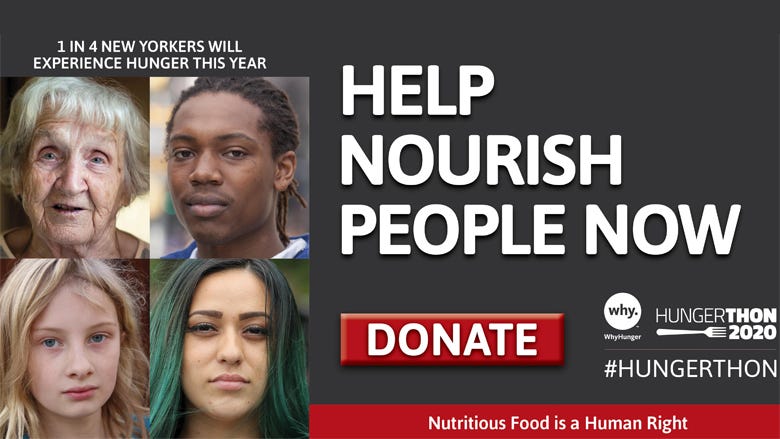 Hungerthon is a chance for New Yorkers or anyone across the WCBS 880 listening area to pitch in and contribute to this cause. WHYHunger partners with various organizations to present one-of-a-kind auction items that people can bid on with the proceeds going to WHYHunger.

All auction items can be found at Hungerthon.org.

WCBS 880 has our own list of experiences that we are offering this year like video meet and greets with various members of the staff including Wayne Cabot, Tom Kaminski, Joe Connolly, Craig Allen and Lynda Lopez. All of the 880 items can be found at Hungerthon.org/WCBS880.

One of the items we are also promoting is a virtual concert with Tom Chapin, the brother of WHYHunger founder Harry Chapin.

In an interview with WCBS 880 for Hungerthon, Tom Chapin told our Wayne Cabot and Tom Kaminski that this year is most important to help.

“We’re all facing this incredible pandemic now and its’ even worse right now,” he said.

The pandemic came in a year where WHYHunger and the Chapin family celebrated the release of a documentary about the life and work of Harry Chapin called “Harry Chapin: When In Doubt, Do Something.”

Tom Chapin told WCBS 880, “Think about it. He died in 1981, that’s 39 years ago and we’re still talking about him and these organizations, WHYHunger and Long Island Cares.”

Chapin said “it’s other people who have taken up the banner” after Harry’s death “and that’s exactly what we are doing today” with Hungerthon.

“There’s a way you can help, you don’t have to be Harry Chapin” but Hungerthon gives you a chance to “fill your shoes a little fuller and help those around you” as Harry used to do.