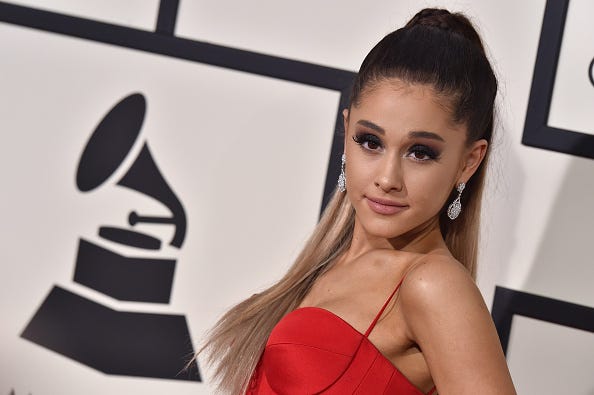 Ariana Grande took to Instagram on Sunday to announce her engagement to boyfriend Dalton Gomez.

In a series of photos of herself alongside Gomez, Grande showed off her relationship and the ring on that finger. The ring appears to be an oval-shaped diamond accompanied by a pearl.

A source tells People of the engagement, "They couldn't be happier. They're just so excited. This is a happy time for them, both sets of parents are thrilled."

Some of Grande's famous friends took to the comments section of the Instagram post, writing their messages of congratulations for the couple. Hailey Bieber writes, "YAYYYYYY!!!!! 😍😍😍😍😍 so happy for you guys!!"

Grande's manager, Scooter Braun, commented, "Congrats to these two amazing souls. Ari we love you and could not be happier for you. Dalton you are a lucky man."

Grande's mother, Joan Grande, took to Twitter with her own wellwishes, writing, "I am so excited to welcome Dalton Gomez into our family! Ariana, I love you and Dalton so much!!!! Here’s to happily ever after! YAY! xoxoxo"

I am so excited to welcome Dalton Gomez into our family! Ariana, I love you and Dalton so much!!!! Here’s to happily ever after! YAY! xoxoxo

The news of Grande's engagement comes just nine months after the news of her relationship with luxury real estate agent Gomez broke. Grande has been relatively secretive about her love life since ending things with Pete Davidson in 2018.

However, a source told Entertainment Tonight in May that the pair were "in a really good place" as they quarantined together in Los Angeles.

The source went on to describe Grande's secrecy when it comes to her relationships. "Ariana has had some hesitation being so public about her relationship with Dalton as she's seen how that has worn on her past relationships," they said.