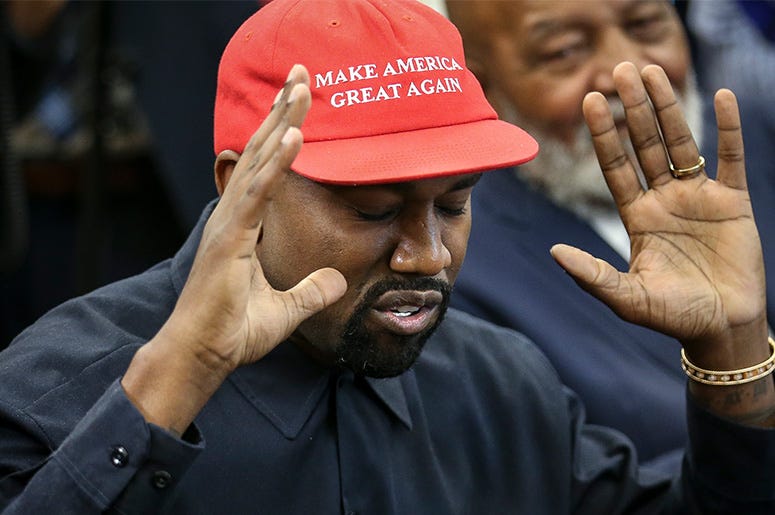 Kanye West made an 11th hour appeal to voters early Tuesday, tweeting a makeshift policy agenda that promises to “cure homelessness and hunger,” if elected President of the United States.

In a series of tweets oscillating between political promises and scattershot statements, the rapper/entrepreneur advocated voters to express more empathy for the disadvantaged. “I was just speaking with someone that told me their life story and they used to be homeless,” West stated. “We must and will cure homelessness and hunger. We have the capability as a species.”

Other statements included “We will cure hunger,” and “We as a people will heal. We will insure the well being of each other.”

We will cure hunger

We as a people will heal. We will insure the well being of each other

Then clocks struck 7AM on the west coast and Kanye was ready to pronounce a final self-endorsement for POTUS. “God is so good Smiling face with smiling eyes,” he says. “Today I am voting for the first time in my life for the President of the United States, and it's for someone I truly trust...me.”

God is so good 😊 Today I am voting for the first time in my life for the President of the United States, and it's for someone I truly trust...me. 🇺🇸 🕊

Most polling does not register West’s chances of winning nationally or in swing states. Many election offices across the country denied Ye a spot on the ballot. His only path to victory would be a massive write-in campaign. West has shared supposed photos of fans writing him in on their ballot.

As November 3 rolls past and Americans cast their votes for the next leader of the free world, so to ends Kanye West’s long, strange campaign journey. Notable moments include a frantic initial campaign rally, a tweet storm that drew concern for his mental health, a clandestine meeting with senior White House advisor Jared Kushner and a political poster randomly referencing Kristen Dunst. There’s always 2024!

WATCH MORE: When We Become President…I'm Changing Plane Name To Yeezy Force One