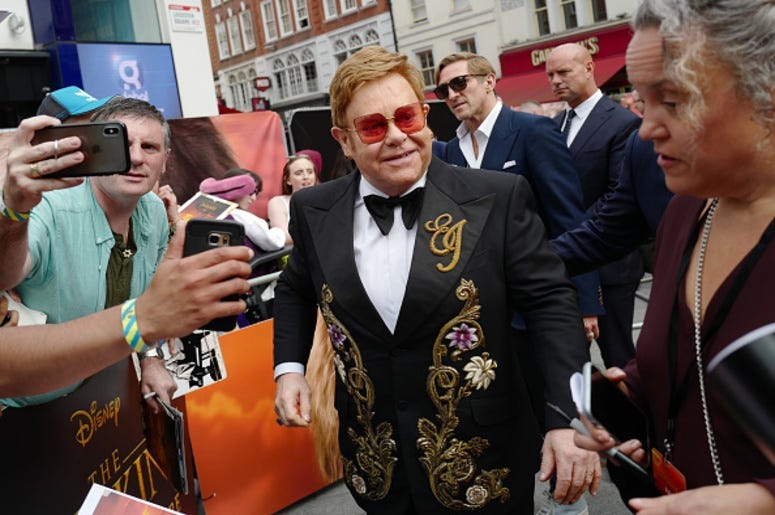 Elton John has made plenty of headlines recently thanks to his new memoir , ‘Me.’ Not only is the book filled with incredible stories about his own life, but some celebrity encounters most would find hard to believe. Here are some of the best stories Elton John has decided to share with the world.

While on ‘Jimmy Kimmel Live’ this week, Elton John shared a wild Stevie Wonder story from his book. Apparently John allowed Wonder to drive his snowmobile alone when the singer came to visit John at his Colorado home. The singer said he has “no idea” how Wonder was able to pilot the snowmobile.

His memoir also tells stories of his friendship with John Lennon, including the claim that Elton John once got Lennon and Yoko back together. John says a night between the three of them “ultimately it led to John reuniting with Yoko.” Of course, there are plenty of stories of his friendship with Freddie Mercury as well; joking with the singer at Live Aid, and while the singer was on his death bed. “He was too frail to get out of bed, he was losing his sight, his body was covered in Kaposi’s sarcoma lesions, and yet he was still definitely Freddie,” said John.

Elton John and Rod Stewart have been friends since the 60’s, but the two legends have a tendency to prank each other. This came to fruition in the 80’s when John hired someone to shoot down a blimp with Stewart’s face on it. When Stewart found out he immediately called John and lovingly said, “It was you, wasn't it? You cow!"

After a dinner party, a number of big name musicians gathered to play charades, but according to John, Bob Dylan couldn’t quite get the hang of the game. After a few too many drinks, John began throwing oranges at Dylan, only to regret it the next day when hearing the story from his manager.

Many fans were shocked to learn his relationship with Tina Turner was a fiery. According to the memoir, Turner was rude to John in the studio, making fun of his attire. This led to John telling Turner to “shove her song up her f***ing arse.”

His memoir tells the story of seeing the queen slap her nephew and say “don’t argue with me I am the queen!” He also once witnessed actors Richard Gere and Sylvester Stallone fight over Princess Diana. “If I was bowled over by Diana, it was nothing compared to the impact she could have on straight men," said John.

The book is full of incredible stories, not just about other famous people, but his own life as well. With all these new stories, a second Elton John biopic may already be necessary.

Via Vulture, CNN and Radar Online