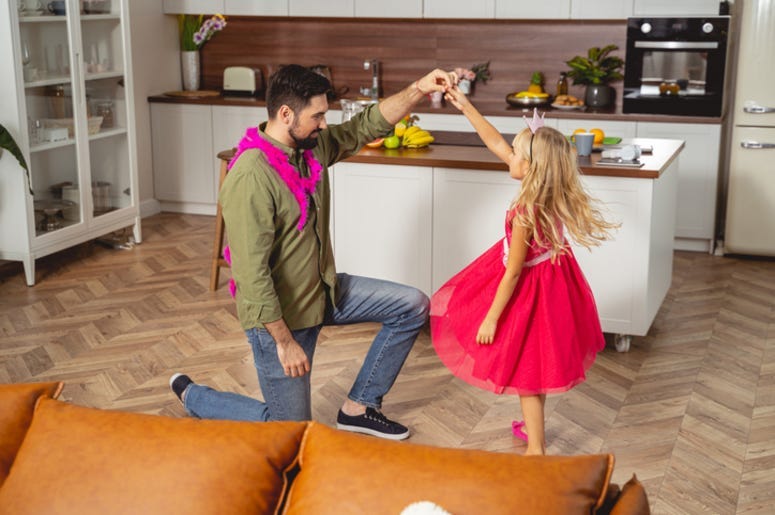 James Breakwell, best known as the comedic Exploding Unicorn on social media took matters into his own hands with the help of his wife Lola when their daughter’s father-daughter dance was canceled due to the coronavirus pandemic.

Last weekend the girls Betsy 9, Mae 7, Lucy 5, and 4-year-old nicknamed Waffle had planned to attend their schools father- daughter dance. The girls were very bummed when the event was canceled. They love to dance and were looking forward to the dancing the evening away.

The parents decided to surprise their four daughters with the idea of hosting their own father-daughter dance at home.  James and Lola sent the kids into their room with a big bowl of popcorn to watch a movie. “We told them not to come out no matter what,” James said.

The parents quickly began decorating. They blew up balloons, made a photo booth, placed a flashing lights video on all the television and computer screens. Making the atmosphere feel real.

"When we turned off all the other lights, the space actually looked like a real dance," James said.

James and Lola then told the girls to put on their best party dresses and come downstairs. According to James, they were completely surprised and had a blast. "The dance made it easier for the kids to get through this. They miss their friends and school and are going a little stir-crazy. This helped them burn off excess energy and showed we can still have fun at home."

The local Daddy-Daughter Dance was canceled due to the coronavirus, so we threw one of our own at home.

We even invited Mom since it was sort of her idea. pic.twitter.com/TEHFvHJQ44

Here is to parents finding fun ways to create childhood memories with their families during this crisis.