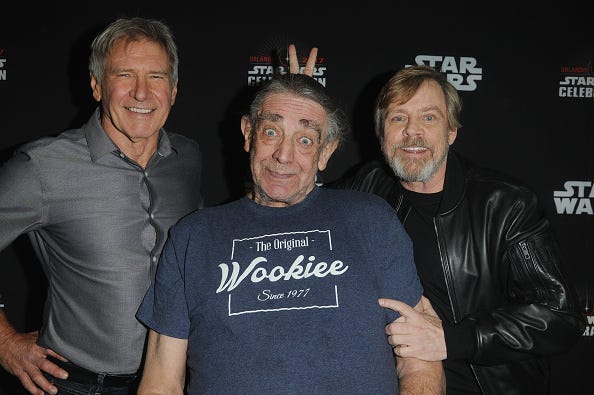 Tributes have been pouring in following the death of actor Peter Mayhew, who passed away Tuesday evening at his North Texas home. Mayhew is best known for his portrayal of the Star Wars character Chewbacca.

Actor Mark Hamill who worked alongside Mayhew on Star Wars took to Twitter after hearing the sad news. Hamill called Peter a “loyal friend and “the gentlest of giants.”

He was the gentlest of giants-A big man with an even bigger heart who never failed to make me smile & a loyal friend who I loved dearly-I'm grateful for the memories we shared & I'm a better man for just having known him. Thanks Pete #RIPPeterMayhew #Heartbroken @TheWookieeRoars pic.twitter.com/8xbq9HEWF2

Harrison Ford, who also worked on Star Wars with Mayhew, gave a statement to The Hollywood Reporter, calling him a great friend for over 30 years.

"Peter Mayhew was a kind and gentle man, possessed of great dignity and noble character. These aspects of his own personality, plus his wit and grace, he brought to Chewbacca. We were partners in film and friends in life for over 30 years and I loved him. He invested his soul in the character and brought great pleasure to the Star Wars audience. Chewbacca was an important part of the success of the films we made together. He knew how important the fans of the franchise were to its continued success and he was devoted to them. I and millions of others will never forget Peter and what he gave us all. My thoughts are with his dear wife Angie and his children. Rest easy, my dear friend…”

Actor Joonas Suotamo, who took over the role of Chewbacca as a body double in The Force Awakens and The Last Jedi, posted a statement on Twitter saying he was devastated after hearing the news about his mentor.

Peter Mayhew was scheduled to appear at the Dallas Fan Expo this weekend. According to CBS DFW, in honor of the late Star Wars actor, the convention will let fans leave behind a special message at Peter Mayhew's booth

At FAN EXPO Dallas, we would like to honor his memory by giving our fans the opportunity to leave a message on a memorial book that will be at his booth in the celebrity autograph area.