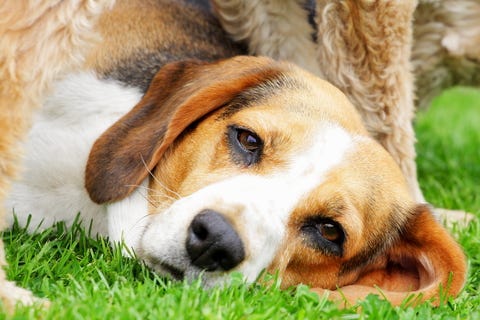 It probably never occurred to you that a beagle could one day be best friends with a possum.

Molly the beagle lives in Victoria, Australia with her owners Elle and Sara Moyle. Molly recently lost all of her puppies after giving birth to them. According to Elle, Molly had been in mourning and was just moping around the last couple of days.

While Molly was out on the Moyle’s cattle farm she returned home with a new friend. A baby possum had latched itself on to Molly’s back. The Moyles told 9 News Melbourne they believed that the possum’s mother abandoned her baby. “They're an unlikely pair, and I think that possum thought Mol was her mother and vice versa.”

Ella says the two have been inseparable ever since they met. Seeing how the two haven’t left each other’s side the Moyles decided to name the little marsupial ‘Poss’.

Now Molly goes everywhere with Poss on her back. Though Poss is a nocturnal animal, Molly still keeps an eye on her during the day even when she’s not riding with her. According to Elle, Molly just stands by and waits for Poss, “Molly just sits under the tree where she's sleeping and just waits for her.”

Sara says Molly’s been strolling around the property in a much happier mood since Poss came along. “It's certainly uplifted her mood, they both needed each other I think so it's been a fantastic relationship.”

Talk about the cutest unlikely friendship ever.