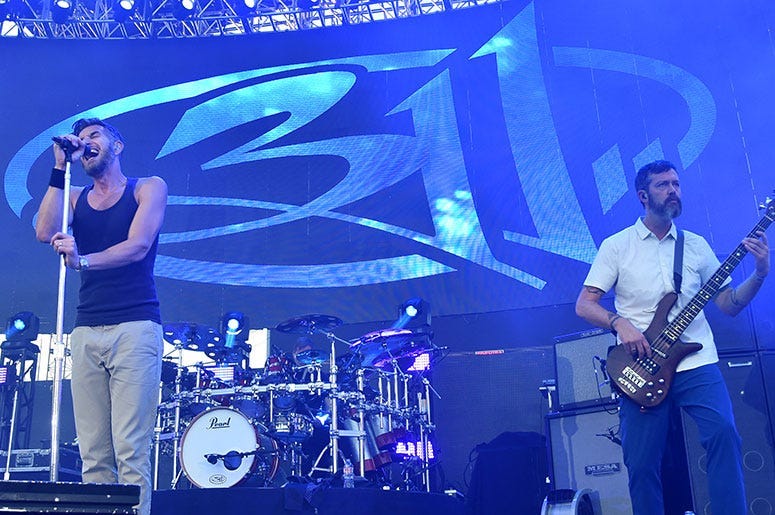 ALT 103.7's Jenn talked to Nick Hexum and P-Nut from 311 and talked the band's upcoming record, their new tour, what it was like in the studio, and how being dads have influenced their music.

"We've been working on it for about a year and a half...we feel like we really kind of kicked open a new door for our sound. And it's a very eclectic album of classic heavy sounds, but also some very modern departures. So we just try and take down anything creatively and just go a lot of different directions. There is something for everybody,": Nick Hexum said about the band's upcoming 13th studio album.

Jenn asked the group about working with producer John Feldmann on the new project. "Super fun writing with him (John Feldmann). Super fun recording with him. He is a rollercoaster of a man. That is almost impossible to hold onto," P-Nut answered."I saw him talk to us like no one has ever talked to us. Cause he's on a peer level. Every other producer has been almost in a fatherly kind of age difference. But Feldmann and use we grew up together more or less. He was kind of brutal. He's like, "Do It Better". And then just press record." Hexum then added, "That was literally his notes sometimes, "Sing it better,"

The conversation turned to some collaborations for the upcoming album, and the band let it slip that Blink 182's Mark Hoppus worked on a song with the band. "He (John Feldmann) works with Blink 182 a lot so we had Mark Hoppus come in and write a song with us," Hexum said. "It was a little terrifying walking in the room right there and I was like "There's Mark." P-Nut added. "He (Hoppus) loved being there that's the cool thing."

311 just announced a tour with Dirty Heads which stops at the Pavilion at Toyota Music Factory on August 8th, and Hexum and P-Nut are looking forward to it.  "That's a party right there...They're great guys" Hexum said about the band's upcoming tour with Dirty Heads."I see backstage jams happening, and barbecues," P-Nut continued. ALT 103.7 is presenting the DFW stop on that tour and you can get your tickets right now HERE.

With the upcoming new album and tour, Jenn asked the band what sparks the band creatively after nearly 30 decades of creating music. "I think having a very wide listening experience. If you mix up your listening experience it will that will mix up your creativity. And also having hobbies, and getting out to the outdoors. You've got to get away. You can't just write year round. You've got to go live." Hexum answered. P-Nut continued, "I don't know, not much. It's hard to get me to write. I have to be in a room with someone who wants to write to get me writing."

Everyone in 311 now has children, and Hexum touched on how that has changed their songwriting for the upcoming album, "The four of us band members are dads to two or more children. People have asked us,"How has that changed your writing or your inspiration?" and certainly it's a new type of feeling. A deep love, and adoration that you never can experience until you have kids. There is a song called 'Good Feeling' on the new album that's inspired by how I feel about my kids, and it's a joyous romp."

Listen to the complete interview in the audio below, and don't forget to get your tickets to ALT 103.7 presents 311 and Dirty Heads at the Pavilion at Toyota Music Factory on August 8th right HERE.