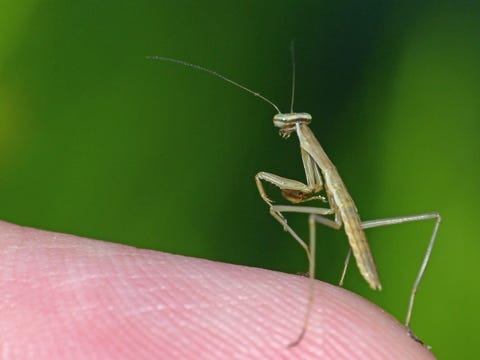 It was a pleasant holiday season all throughout the house until hundreds of little bugs came crawling out.

Over a hundred praying mantises hatched in Molly Kreuze’s home in Springfield, Virginia during the holidays. Apparently, there was a brown egg case underneath one of the tree branches that no one noticed. One day there was nothing to worry about, and then out of nowhere hundreds of praying mantises came crawling out.

Kreuze told WSBT News that the little bugs were everywhere, “Crawling on the walls, crawling on the ceilings. Just kind of moving.” If this happened in your home you would probably call an exterminator and have your house fumigated immediately, not Molly.

So far she’s caught more than a hundred and has placed them in a giant box, “I hope to find them a home, I don’t want them.” Next year Kreuze plans on getting a fake tree. If you think about it the situation could be a lot worse. There could be spiders coming out instead.

So far she has captured more than 100 praying mantises 😱 @ABC7News at 6pm. pic.twitter.com/d9MFEayK10

Do you prefer a real Christmas tree or a fake tree?