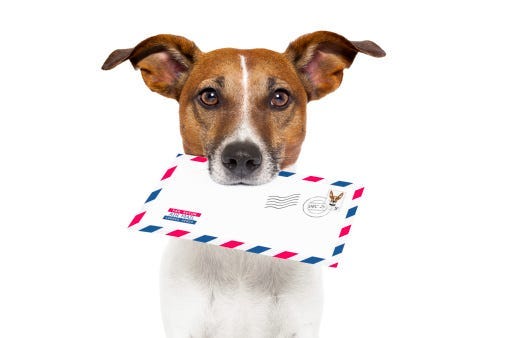 Movies and television shows like to poke fun at how dogs don’t like mailmen or delivery drivers. In this case, they were very wrong.

Fernando Barboza is just a friendly neighborhood mailman who likes to pass out treats to all the dogs he sees on his route every day. Last week Barboza learned that  Gretchen a German Shepard who he stops by to see every day had passed away.

Gretchen’s owner Chris Cimino came out and gave Barboza a note and some dog treats. The note asked Barboza to pass out all the treats that Gretchen never got to have to all the other dogs on his route. The note later went viral after Barboza's daughter posted it on Twitter. You can read the note down below.

Cimino told Good Morning America that Gretchen was a rescue and didn’t trust everyone, but loved seeing Barboza. “She started looking forward to him coming by. He would deliver a package to the old man across the street and she would get really jealous. Even when he didn’t have any packages to deliver to the door he would drive by and say, ‘Hey, Gretchen,'”

Gretchen passed away after battling a neuropathic disease; Cimino hopes his story will inspire others to adopt older dogs.