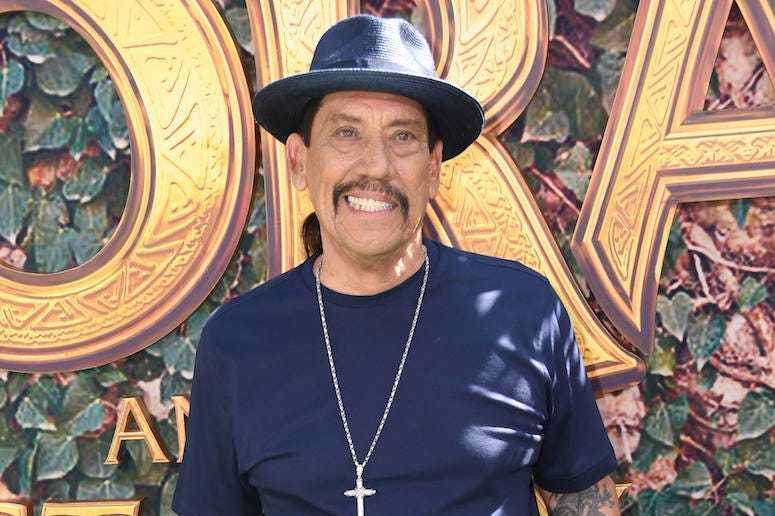 Actor Danny Trejo was a real-life hero yesterday after witnessing a collision between two vehicles in Sylmar, a neighborhood in north Los Angeles, yesterday afternoon.

One of the vehicles overturned, trapping a young special needs child inside.  Trejo and another bystander immediately rushed over to the car.  Trejo crawled into the car, but couldn't unhook the seatbelt from his angle.  The other bystander, a young woman, was able to crawl in from the other side, unhook the seatbelt, allowing Trejo to safely pull the child from the wreckage.

Firefighters had to cut the boy's grandmother out of the vehicle, all the while Trejo, who worked with special needs children, comforted the young boy to keep him calm.  He said, "He was panicked.  I said OK, we have to use our superpowers.  So he screamed 'superpowers' and we started yelling 'superpowers.'  I said do this, with the muscles.  He said 'muscles.'  We got kind of a bond. I kept facing him away from the accident."

Three people were transported to the hospital as a result of the collision, but thankfully none suffered life-threatening injuries.

Trejo, often the tough guy or villian in the movie roles he appears in, believes in the power of helping others.  He told Eyewitness News, "Everything good that has happened to me has happened as a direct result of helping someone else.  Everything."

Not only is @officialDannyT (Danny Trejo) one of the nicest actors, he’s also a #hero!

He was right behind a crash in Sylmar and pulled a special needs baby out of an overturned car. He distracted the boy until grandma was OK. ♥️ —> https://t.co/tS2Za4bZVZ@ABC7 pic.twitter.com/U9iLzAkHkA