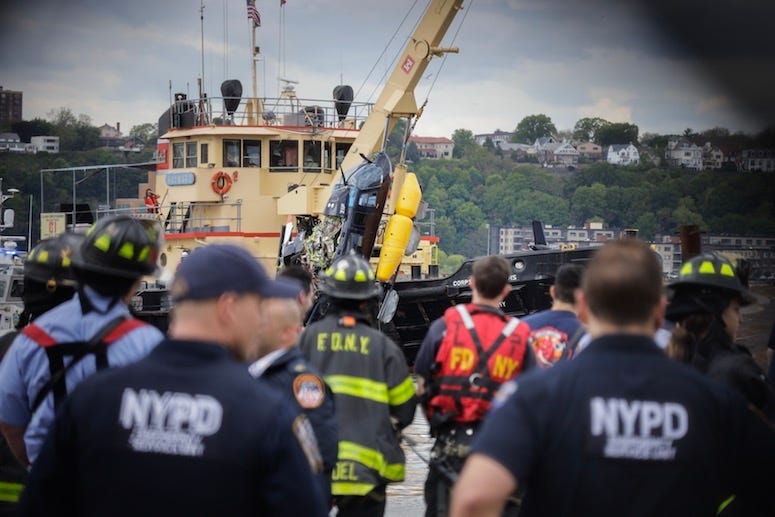 A helicopter had just refueled on the West Side of Manhattan yesterday afternoon when disaster struck.

The 35-year-old pilot suddenly lost altitude, sending the chopper into a tailspin, all leading to a crash landing into the Hudson River.

MAYDAY: Video shows a helicopter going into a tailspin, before it goes down into New York City’s Hudson River. The pilot – the only one on board – was safely rescued. https://t.co/j6FIsqgyLO pic.twitter.com/wgOBYekms1

The helicopter was mostly underwater.  Thankfully, inflatable pontoons kept it from sinking into the Hudson completely.  The FDNY and NYPD were able to secure the helicopter, and drag it to a nearby heliport where it was tethered, and eventually completely lifted out of the water.

A pilot was safely rescued after a helicopter crashed into New York City's Hudson River. The FAA says it is responding to the crash site. https://t.co/ZwRz1ssBX5 pic.twitter.com/pEF1SGF2Gk

Luckily, the pilot was the only person on board, and he was  safely removed from the water by a NY Waterway Ferry.

Relieved to report there were no deaths or serious injuries after a helicopter incident on the Hudson river. Thank you to our first responders for your quick action. Please stay clear of 34th St and 12th Ave on the West Side so emergency response teams can complete their work. https://t.co/lrwJWuEW5A

In 32 years, NY Waterway crews have rescued almost 300 people from the waters of New York Harbor, including 143 people alone from U.S. Airways Flight 1549 in "The Miracle on the Hudson."