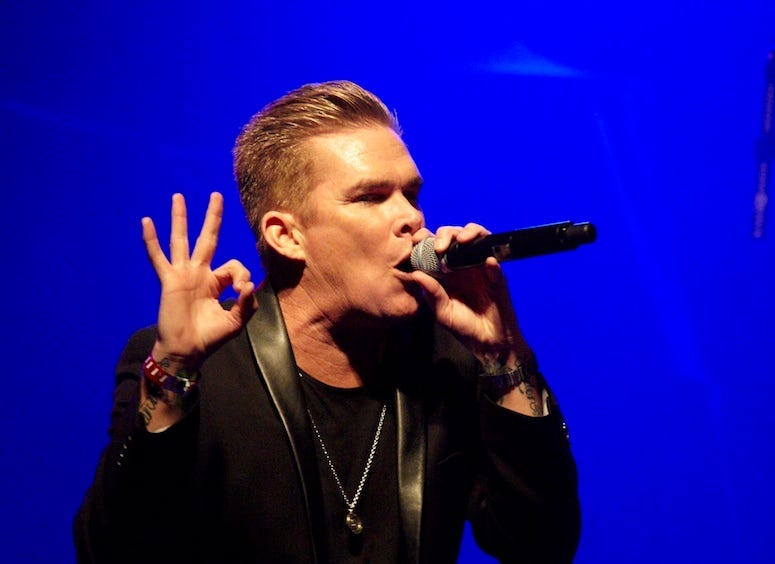 The years of "being on the road and being two feet in front of cymbals and drums" have caused major health concerns for Sugar Ray singer Mark McGrath.

By all accounts, the 51-year-old singer considers himself deaf.  He told DailyMailTV this week, "I’m deaf now. I cannot hear any more...high frequencies, I can’t hear anymore.  I'll be listening to people and they’ll tell me their names and I can’t hear anymore.  It’s scary because my job is hearing.  [The future] is absolutely a worry of mine."

For years, McGrath did not wear in-ear protection on stage, even though he was routinely advised by audiologists.  He said, "Fortunately for the new generation, they have in ears. I’m dumb enough not to use them though.  I still need the sight sounds and smells of a concert and that includes the auditory part, but unfortunately, mine’s going."  While in-ears are incredibly useful in protection, they do block out ambient and room noises, which can sometime make a venue sound dead.

McGrath even received some helpful warnings from Huey Lewis, who had to stop touring due to hearing loss.  He said, "The whole Huey Lewis thing has been a warning for all of this for sure.  There’s a lot in play there. It’s one of those things you don’t even want to admit.  You can’t repair your hearing.  Once it goes, it goes.  You can hope to stop the damage."

Still, McGrath has no plans to stop touring or performing any time soon.  Let's just hope he takes the necessary precautions to stay healthy as long as possible!