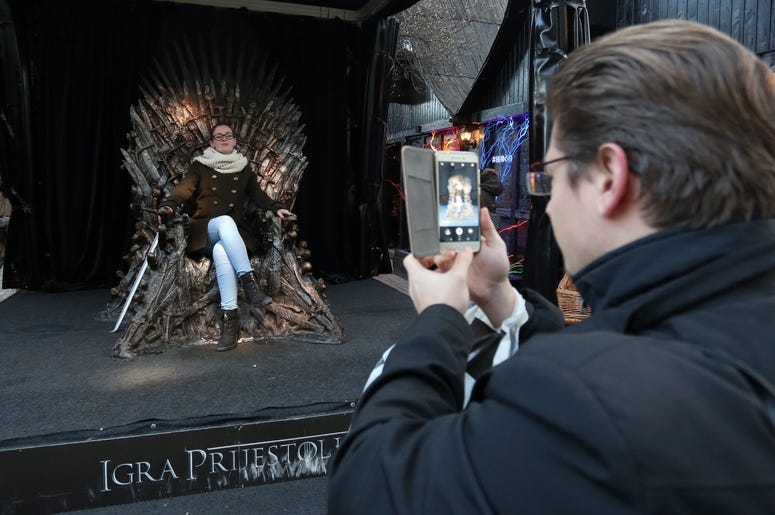 Games of Thrones fans in Dallas have a new reason to be excited. While the final season of the hit HBO show is still a few months away, a replica of the Iron Throne has been placed in the lobby of the AT&T building in downtown Dallas. Followers of the series are welcome to come claim their throne, or at least get their photo taken with the sword laden chair.

Ooh, @GameOfThrones fans are going to love this. https://t.co/n1pKVSVxKT

The Iron Throne will sit in the lobby of AT&T’s corporate headquarters at 208 S. Akard St. It will remain there for fans to come take pictures with Monday through Friday, from 7 a.m. to 7 p.m. The chair arrived at the beginning of the year, and according to AT&T, will remain there at least through March 30th.

AT&T recently acquired HBO’s parent company, Time Warner Cable. According to a spokeswoman for AT&T, “The dragons were busy. So we brought the next best thing. We’re excited for fans to experience a piece of King’s Landing in Dallas.” While the chair is open to the public, fans will have to make their way through a bit of construction to get to the replica throne.

When they tell you to strike a pose on the #IronThrone ... oh well #GameOfThrones

Once in the lobby fans will be allowed to take photos, sitting in the chair, and while cosplay is allowed, AT&T asks that no weapons are brought onto the property. This is not the time the Iron Throne has made its way to Dallas. The Texas Rangers held a special Game of Thrones night, which included the throne, and last September the Game of Thrones Live Concert Experience made its way to town.

The eighth, and final, season of Game of Thrones premieres in April, on HBO. The highly anticipated finally of the series has fans clamoring for any final bit of the show they can get their hands on. Luckily, fans of the show in Dallas, can feel like a part of the show, as they take their seat in the replica Iron Throne.