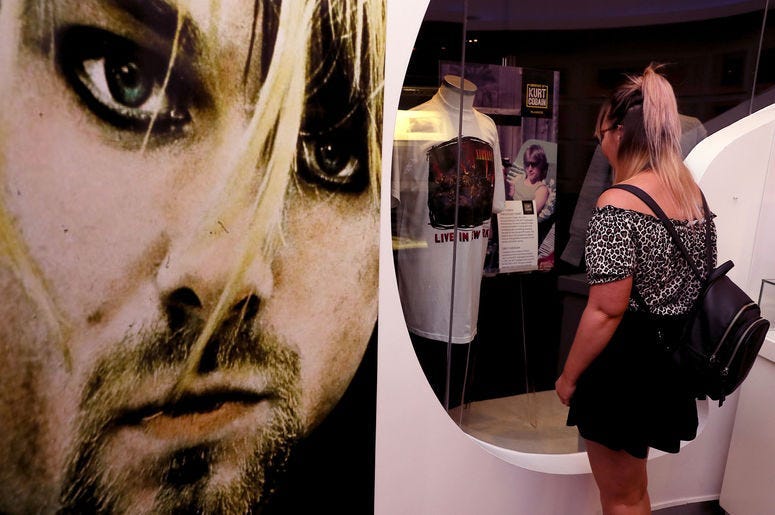 April 5th marks the 25 year anniversary of Kurt Cobain’s death. While the iconic rocker is missed my many adoring fans, his music has not been forgotten, and neither has his legacy. Nirvana’s former manager, Danny Goldberg, is releasing a new book about Cobain, and recently released a shocking excerpt.

Danny Goldberg, one of Nirvana’s managers from 1990 to 1994, documents his stint with the iconic grunge band in a new book, 'Serving the Servant: Remembering Kurt Cobain' https://t.co/kEgHHxxSQL pic.twitter.com/ECvfBGIVA1

In a new excerpt from the book, published by The Star, Goldberg discusses his final phone call with Kurt Cobain before his death. In the book, the band’s former manager writes, “Katie (Goldberg’s 3-year-old daughter) wandered into the room while I was talking to him and said she had something she’d been meaning to tell him. I hoped that her voice would cheer him up so I put her on the phone.”

In order to cheer up the depressed icon, Goldberg put his daughter on the phone to talk to Cobain. Goldberg would continue saying, “‘Kurt, you sound a little grumpy. Don’t be grumpy!’ and said she loved him and handed the phone back to me. I told him I loved him again. Kurt and I said goodbye to each other and his despair sounded undiminished. I felt helpless. It was the last time we spoke.”

Kurt: thanks for teaching me to be me & to never apologize for it. Thanks for teaching us to love everyone equally. Thanks for giving us your music, your heart, your humanity. Words cannot express how much you mean to me or to the rest of your Nirvana fam. Rest easy ❤️#KurtCobain pic.twitter.com/lkUCafrS7y

With the 25th anniversary of Kurt Cobain’s death only a day away, many fans have turned to social media to pay their respect. With Danny Goldberg’s book being released, fans will now have another source of intimate information about the late star. While Kurt Cobain has been gone for 25 years, he isn’t anywhere close to being forgotten.