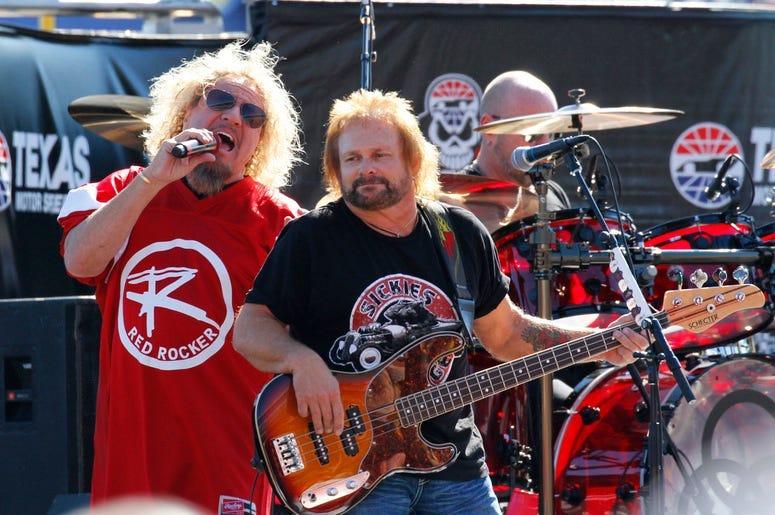 The Van Halen reunion rumors just won’t stop, even as the band continues to deny the reports. Rumors of a potential original lineup tour have been floating around for months. Now former Van Halen front man, Sammy Hagar is claiming original bassist, Michael Anthony, has been contacted by the band about a possible original lineup reunion.

In an interview with Eddie Trunk on Wednesday, Sammy Hagar discussed the phone call made to Michael Anthony. According to Hagar, “He got a call six months ago from [Van Halen’s> management saying, 'Are you interested?' And he said, 'Yeah. I'm doing a record with Sammy right now. We're booking shows, so you'd have to work around it.'” Sammy would continue saying that the band didn’t confirm anything after that, just saying they’ll get back to the bassist, and left it at that.

While the rumor Sammy Hagar dropped was exciting, the singer was there to promote his current band, The Circle. The group is made up of Hagar, along with Michael Anthony, Jason Bonham and Vic Johnson. The band plays songs from the member’s respected discographies, but plans to put out their debut album later this year.

📢 Sammy Hagar & The Circle--including Michael Anthony, Jason Bonham, and Vic Johnson--will debut their upcoming album Space Between in Indy at the Lawn on May 23!

Tickets on sale February 15 at 10am. pic.twitter.com/ZUDNxZ7CGB

While fans were skeptical of the news, as Van Halen continues to deny these rumors, many were excited at the potential of an original lineup reunion. One twitter user wrote, “And we're just now hearing about this,” after seeing this call took place six months ago. While Michael Anthony is currently working with The Circle, he has Sammy Hagar’s blessing to leave if the reunion happens. “You go do this. You're a founding member in that band.' And for the fans, he needs to do it. He is the missing element right now,” said Hagar.

And we're just now hearing about this? pic.twitter.com/WLh1tMpFpx

Michael Anthony and Van Halen separated in 2006, as the bassist was replaced by Eddie Van Halen’s son, Wolfgang Van Halen. Sammy Hagar and Michael Anthony have continued to work together, as the former Van Halen members have stayed close since their time in the band together. Still, Van Halen fans can only hope that Hagar spilling the beans doesn’t ruin things, and soon their will actually be the reunion everyone truly wants.