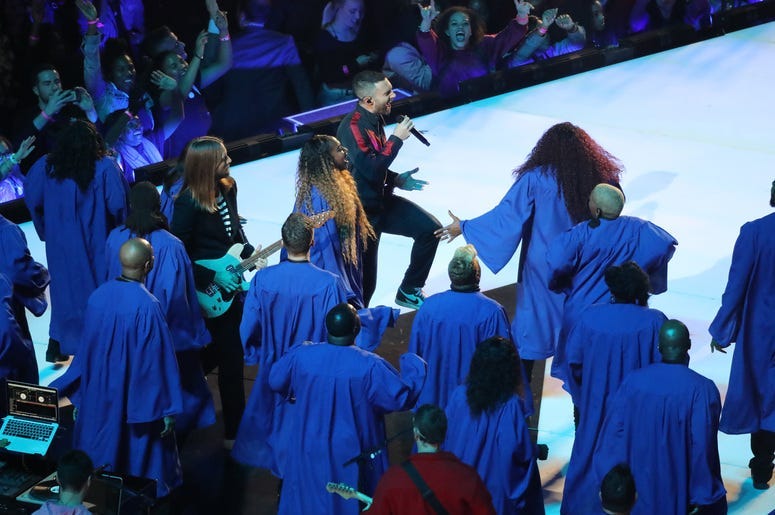 This year’s Super Bowl halftime show was criticized by many for a number of reasons. Whether it was the choice of band, or the lack of SpongeBob in the show, people found a reason to dislike the performance Sunday night. However, there was one bright spot during the show, and it came in the form of a scene stealing performance by gospel singer Carmen Carter.

While Maroon 5 was the headliner for this year’s show, and was joined by a couple of famous Atlanta rappers, most of the positive feedback after the show was about the church choir that joined the band on stage. Carmen Carter, the gospel singer her got her once in a lifetime moment, was joined by a choir that included her son, daughter and nephew joined the band to perform their song, “Girls Like You.” From the moment she started singing social media quickly started raining her with compliments unlike the much maligned halftime show.

ZzzzzzZzzzzzzzzzzzZzZZZZZZZIDxjwjsbsneowiwbmKkkkkshhZONK. Sorry. I just woke up from the half time show when that fabulous woman in the choir started singing. #SuperBowlhalftime #SuperBowl2019

One twitter user wrote, “Whoever that woman is should just take over and sing the rest of the night.” Plenty of others joined in in calling Carter’s performance the best part of the show. While Maroon 5 took a ton of heat for their show, having Carmen Carter join them seemed to be a big hit with fans. Carter shared that she was able to land the gig after a friend invited her to put a demo together for Maroon 5.

Speaking to the media after the show, Carter said, “Of course I was overwhelmed and overjoyed. To be able to bring my children because we’re really family-oriented, it was a chance of a lifetime." She now has gained a number of fans due to her incredible performance on one of the world’s biggest stages. Of course she didn’t want to upstage Adam Levine, or the rest of Maroon 5, posting later on her social media, thanking the band for the opportunity.

Though it was a rough night for Maroon 5, at least Carmen Carter got her moment in the spotlight. Fans in Atlanta and watching at home were happy to share in their excitement for the gospel singer, in between negative comments for the rest of the show, of course. It is unknown what is next for Carmen Carter, but after Sunday Night’s performance, her name could be popping up again soon.