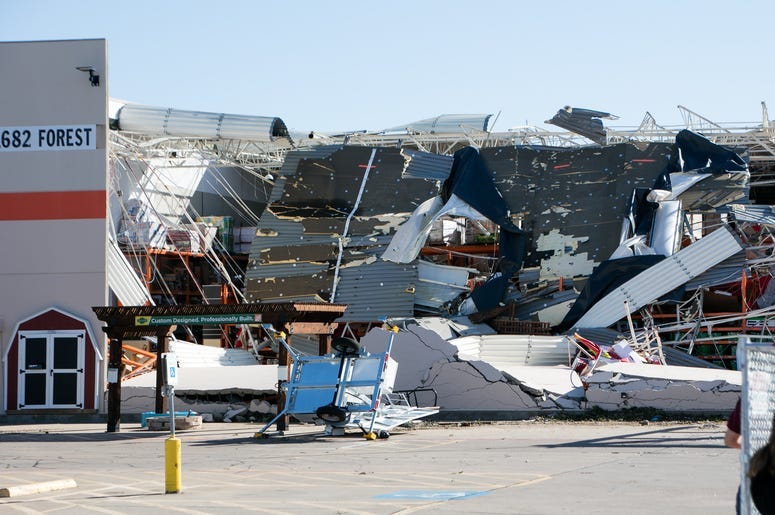 Mother nature had a severe thunderstorm warning and a tornado watch on a Sunday. At the moment Jordan Jasper, Home Depot store manager had not been aware of the local newscast urging locals to take shelter.  At the time he was at work at Home Depot of Forest Lane and Central. As a manager he knew he had to step up and make some decisions to ensure the safety of employees.

He took caution and closed the store.  He sent four out of his nine associates home by 8 p.m., when  the closing crew usually stays until 9:30 p.m. after closing, he and the other five employees locked up the store and headed straight home.

Within an hour, their Home Depot Store had been completely damaged by the tornado.

His Operations manager called him yelling, “Your store is gone!” As he sent him a tweet form a news reporter showing the store had been destroyed. The roof was gone.

Awful damage to the Home Depot near Forest and Highway 75 in Dallas. So thankful the store wasn’t open and filled with people when the tornado hit. https://t.co/5qVP0b94XJ

Besides all the damage the tornado had caused the store, Jasper still decided to go to the store the next day along with his crew to help clear debris.

“But just because we can’t clock in doesn’t mean we can’t be here helping out,” Jasper said

Jasper split the store’s 160 employees into three and transferred them to other nearby stores, unless they’d prefer to work elsewhere.

Monday after the storm, Home Depot presented that flag to Jasper. Lowering was an emotional moment for him.

The framed flag now rests on his mantle, next to his manager’s keying. They’ll never be used again, but it’s a reminder of the occasional power of simple decisions.