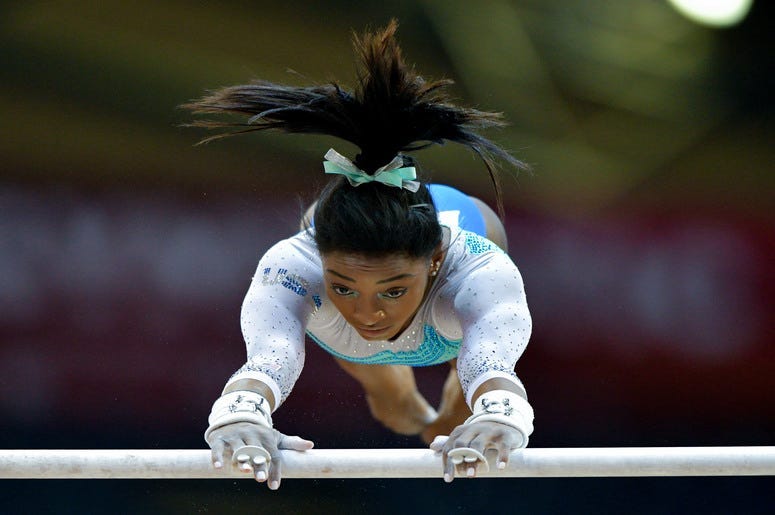 Simone Biles continues to flip, twist and land in the hearts of Americans across the country. A day after becoming the first person ever to land a double-double dismount, the U.S. gymnastics star continued making history by landing a triple-double. She became the first person to land the trick in competition.

RESPECT THAT, BOW DOWN 👑 @Simone_Biles keeps making history! First woman to land a triple double in competition on floor 🔥

During her floor routine on Sunday, Biles became the first woman to land the complicated trick involving two flips and three twists. Thanks to her impressive trick, and overall floor routine, Simone Biles went on to win the U.S. championship on Sunday. Biles took home her sixth championship with a score of 4.95 points.

You already know we had to get the slo-mo for y'all...

Her win was yet another record, as she became only the second woman to accomplish that feat. The other was Clara Schroth Lomady, who did it 67 years ago. The win was also Biles 20th consecutive all-around win, dating back to 2013.

.@Simone_Biles is the first woman in nearly 70 YEARS to win 6 U.S. all-around titles.

Despite her championship victory, the 22-year-old Biles said afterwards she was disappointed with her performance. “I still get really frustrated because I know how good I am and how well I can do, so I just want to do the best routine for the audience and for myself out here." Biles may have been disappointed, but her fans weren’t, as Simone Biles made her case as one of the greatest gymnast of all time.