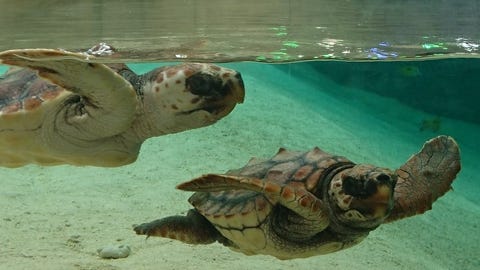 Tom Brady and the Patriots have won the Super Bowl so many times that most of us just want to see them lose. That includes a few sea turtles here in North Texas as well.

A couple of the staff members over at the SEA LIFE Aquarium in Grapevine let their rescued sea turtles determine the outcome of Super Bowl LIII. Their pick, much like the Rams and Saints game was a little controversial.

Sea turtles Scotti and Thally were shown two different signs inside their tank, one read the Patriots the other the Rams. First one to touch the sign with their nose would pick the winner. According to the staff, Thally was about to pick the Patriots then Scotti interfered.

As Thally swam for the Patriot's sign, Scotti moved both of them towards the Rams sign instead and they cast their pick. According to sea turtles Scotti and Thally at the Grapevine aquarium, the Rams are going to win Super Bowl LIII.

Who do you think is going to win the Super Bowl?