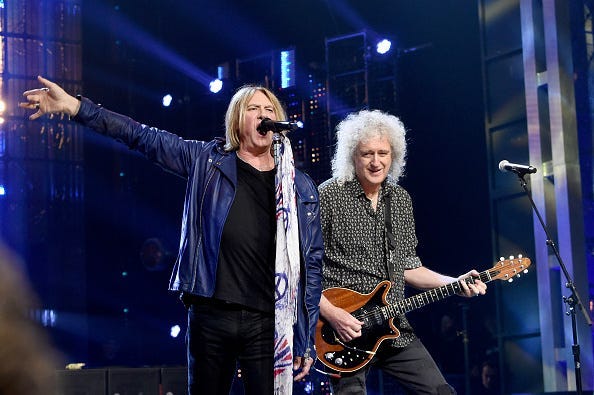 Almost a month ago the 2019 Rock & Roll Hall of Fame induction ceremony took place at the Barclays Center in Brooklyn, New York. Now we’ll finally get to see how it all went down this weekend when it airs for the first time on HBO.

The 2019 inductees included Stevie Nicks, Def Leppard, the Zombies, Roxy Music, and The Cure. There were definitely a few surprises and memorable performances that happened that night. According to Ultimate Classic Rock here are some big moments to look out for when tuning in.

The first surprise of the night happened early on when Don Henley took the stage with Stevie Nicks and performed “Leather and Lace”. Nicks was then joined by pop star Harry Styles during "Stop Draggin' My Heart Around".

Rick Allen’s emotional response is something to be seen. Before Def Leppard came out Queen’s Brian May gave the band quiet the introduction, followed by Joe Elliot’s speech that almost brought drummer Rick Allen to tears.

Expanded setlists are something new this year. Just about every inductee that performed played a few extra songs. Normally bands do three songs during the Rock and Roll Hall Of Fame Ceremony this year everyone did four. Hopefully, HBO didn't edit them out.

Trent Reznor’s induction speech for The Cure is great. The Nine-Inch Nails frontman gave a passionate speech about how The Cure shaped him and music.

Duran Duran gave a shout out to Brian Eno. Simon LeBon inducted Roxy Music and mentioned how Brian Eno, who was absent from the event, helped produce some of the biggest artists at the time.

The Zombies and how excited they were to finally be inducted is just great. Of all the Inductees this year, The Zombies seemed to be the happiest. According to keyboardist Rod Argent, 'Time of the Season' reached the No. 1 spot in America 50 years ago exactly the night they were inducted.

One of the best parts of the night was seeing all the inductees come together for an All-Star Jam and perform “All The Young Dudes” with of Mott the Hoople's Ian Hunter.