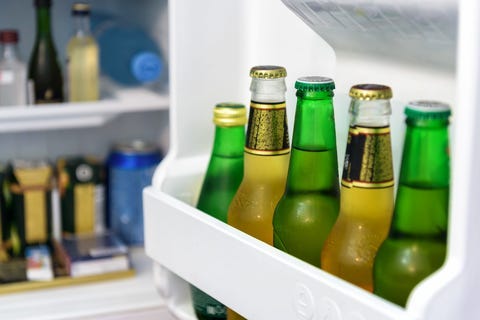 Our neighbors to the north have been getting nothing but rainfall and have seen historic flooding here recently. Now that some of the water has receded, residents can now begin surveying the damage.

Two men from Nebraska Gayland Stouffer and Kyle Simpson, are probably the luckiest people alive right now. While out inspecting the damage to Simpson’s property, Stouffer spotted something odd in the middle of the field. It turned out to be a mini-fridge.

Neither of them could believe it when they opened it up. The fridge was stocked full of ice cold Bud Light and Busch Light beer. They cracked open a cold one and posed for a picture with their once in a lifetime find. Check out their photos down below.

After their photos started being shared on Facebook, the fridge was traced back to its original owner. Brian Healy claimed that the fridge belonged to his dad and uncle, whose cabin is just upstream from Simpson’s property.

Healy told the Omaha World-Herald that this isn’t the first time that the fridge has survived a natural disaster. Back in 2007, this same fridge was still intact after a house fire, the scorch marks on the corner are what gave the fridge away. Simpson says he plans on reuniting the fridge with Healy in the coming days.

What are the odds of finding a fridge full of cold beer and then finding the owner? Talk about a crazy coincidence.