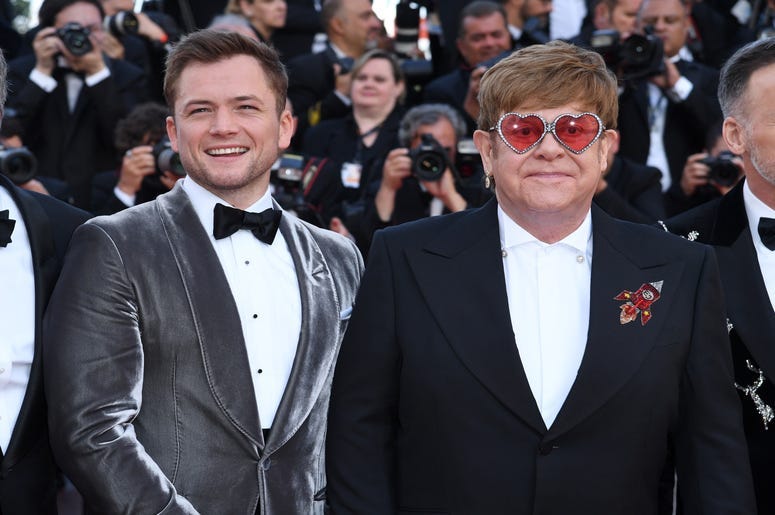 The Elton John biopic, ‘Rocketman,’ premiered this week at the Cannes Film Festival, and while naturally the film will be compared to the success of last year’s ‘Bohemian Rhapsody,’ the reviews so far have been exceptional. The R-rated film has one reviewer saying, “this year’s Elton John biopic is superior to last year’s Freddie Mercury biopic in almost every way.” Check out the full review here.

So Rocketman premieres at Cannes tomorrow. *prays for good reviews*

Both ‘Bohemian Rhapsody’ and ‘Rocketman’ focus on British glam rock stars from the 70’s and 80’s, but the comparisons don’t end there. Director Dexter Fletcher worked on both films, after he was brought in to finish the Queen biopic after Bryan Singer’s departure. The films also focus on the main character’s sexuality.

The big difference so far between the two films, according to reviews is the R-rating and the focus on Elton John’s sexuality in ‘Rocketman.’ Speaking on ‘Rocketman’ reviewer Nicholas Barber said, “the film’s creators have a clear vision of the story they want to tell, and how to tell it.”

I can't wait to see this movie the 31th

Let’s see if rocketman gets the global success bohemian rhapsody has, won’t be easy!

If all these early screenings of #Rocketman selling out around me are any indication... this movie is going to make a solid chunk of money.

If reviews are good, I wouldn’t be surprised if it’s the surprise of the summer season. pic.twitter.com/rm1SN2Fh98

With all the positive reviews, anticipation for ‘Rocketman’ has begun to grow even larger. The film is currently being shown at the Cannes Film Festival. Based on initial reaction, the Elton John biopic may be just as big, if not bigger, than ‘Bohemian Rhapsody.’