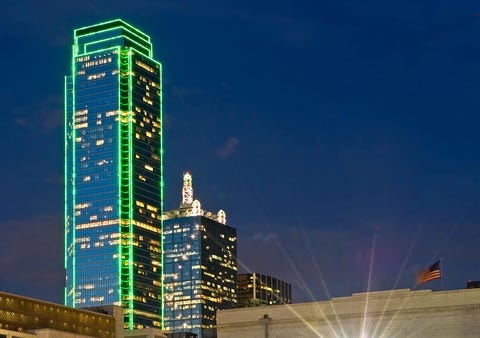 We’re you wondering why the Bank of America Plaza in downtown Dallas wasn’t lit green on Friday night?

We have the answer and it’s probably not what you thought.

Gender reveal parties have become a pretty big deal nowadays, it’s basically a big surprise party that lets you know what to buy for the couples baby shower.

These parties have been getting little carried away lately, some have started wildfires, while others are just gross. This North Texas couple made it pretty cool and unique.

Gini and Lendle Rounsaville got married last year, and as a second Christmas present the two found out that they were expecting their first child. Now only six months away from meeting their newborn baby the couple held their gender reveal party in downtown Dallas.

Thanks to Gini the two went with a very different approach. She just happens to work for the real estate company Peloton that manages the Bank of America Plaza building. You know the tall building that typically lit up green and changes colors occasionally.

Gini convinced some of the people she works with to change the color in order to reveal the gender of her and Lendle's baby. At around 7 PM on Friday night the building would light up either blue or pink, and surprise the couple and all of their friends celebrating down below.

Once the sky was dark the building lit up in a neutral white and then changed to blue, signifying that the couple was having a boy.

Little did the rest of us in the area know that we got the chance to see a gender reveal. All we had to do was take a look at the Dallas skyline.