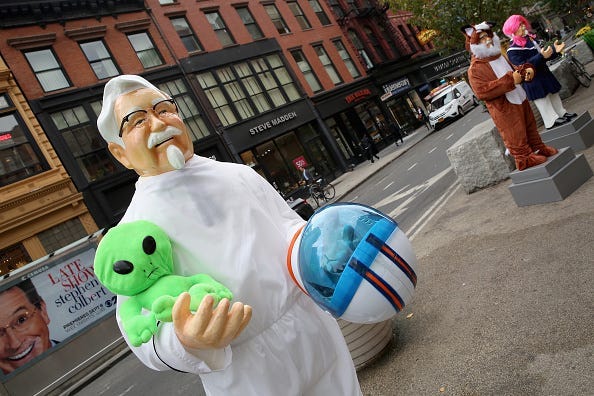 If Marshmello can be a DJ, then why shouldn’t Colonel Sanders?

Over the weekend KFC bought a slot on the main stage at the Ultra Music Festival in Miami. What does that mean? It means that the mascot for Kentucky Fried Chicken, Colonel Sanders himself performed a DJ set for thousands of people.

No, this isn’t an April Fools Day joke.

Sanders dawned a giant head with light up eyes and opened his set by asking the crowd “Any of y’all hungry for some beats?” All the screens behind DJ Colonel Sanders lit up with the words ‘Finger Lickin’ Good”. Check out a clip from his performance down below.

Before DJ Colonel Sanders walked on to the stage, KFC sent out a tweet saying that the Colonel has always been a huge fan of electronic music.

One thing a lot of people don’t know about me is that I have been a huge fan of electronic music for the last few days, and I can’t wait to show off the DJ skills I’ve developed in that time. SEE ME LIVE AT ULTRA on 3/29! pic.twitter.com/vZKBsPTB3q

If more companies start having their mascots perform as DJ’s who would you like to see on stage, the King from Burger King, Ronald McDonald, or the Chick-Fil-A Cows?

Via: Consequence of Sound