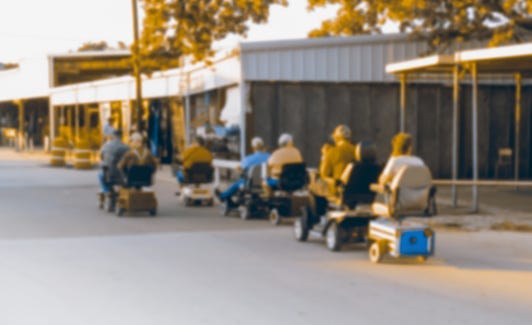 At this point, you’re guaranteed to see some pretty interesting people while at your local Wal-Mart.

Last week police officers in Crossville, Tennessee arrested a woman while she was on her way to Waffle House at five in the morning. Officers found 45-year-old Sally Selby driving an electric scooter in the slow lane on a busy a highway.

Selby told officers that she had built the scooter and that someone had ripped off one of the lights. When officers asked what she was doing, Selby said she was on her way to Waffle House for a cup of coffee.

After police took Selby into custody and charged her with theft, the officers watched surveillance footage from Wal-Mart. The video showed Selby entering the store and shopping with the scooter. She then exited the store and drove the scooter straight through the parking lot.

The scooter was later returned after a Wal-Mart employee was able to confirm that it belonged to the store.

news
Which states have the cheapest and most expensive gas in the country?
news
Smaller turkeys expected to be big this Thanksgiving
music
'Full House' cast: Where are they now?
news
Biden outlines his COVID-19 plan: Mask mandate, widespread testing, ample PPE
sports
Randy Arozarena breaks Derek Jeter’s rookie record for postseason hits
news
Can mouthwash protect you from coronavirus?