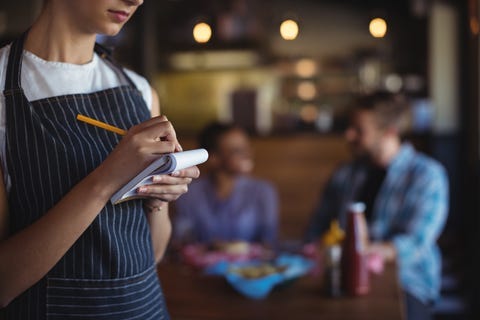 This was probably the best thing you could leave with after going to Taco Bell.

When you’re a kid you expect to get a toy along with your meal when you go to a fast food restaurant, when you’re an adult you can expect heartburn. Customers at this Taco Bell have been leaving with something a little more positive.

Kelly Stewart has only been working at Taco Bell for 4 months, about a month ago she started writing feel-good notes in between customer orders and placing them in their bags.

Kelly told Stracuse.com that it’s nice seeing everyone’s smile. “It’s so nice to see somebody smile because you never know what’s going on in someone’s life.”

She got the idea after she was required to add a promotional survey into each order. Kelly saw that there was a small blank space on the back and thought it would be a perfect spot for “an inspirational pick-me-up”.

Kelly is 27-years-old and has a son, she understands that life can be hard and that everybody is going through something. “I may just work at a fast food place, but you have to take pride in what you do. Especially with how hard today’s times are, it's nice to put a smile on someone’s face.”

The notes she leaves are just small quotes by Franklin D. Roosevelt, Mark Twain, and Vincent Van Gogh and other historical figures. Stewart says she enjoys looking up quotes in her spare time.

Stewart has written so many notes that she can’t even count how many she’s passed out.

Keep up the great work, we could all use a few words of encouragement.