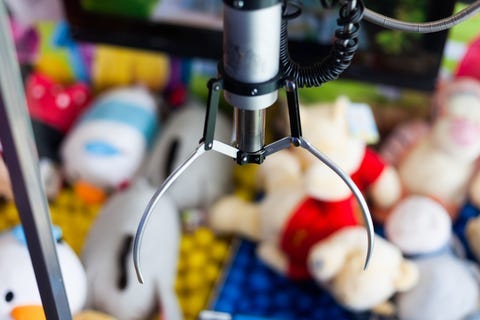 Doesn't everyone wish they could fit through the prize door on the crane game? After all the quarters the machine eats up we deserve a prize.

One toddler in Alabama was tired of waiting for the crane game to give him and his sister a prize so he decided to go get it himself.

The boy's mother Kelsey Ingersoll, was sitting down at the pizza restaurant when her daughter came up and said that Ezra was inside the machine. Ingersoll told FOX 10 News she thought her daughter was just exaggerating, “We thought it was maybe like a basketball, one of those basketball games. We didn’t think you could actually climb into a crane game. It was never a worry of ours.”

Somehow Ezra climbed inside and managed to get stuck in the process. After many failed attempts to get the poor boy out of the machine, first responders were eventually called out to the scene. Apparently, the restaurant employees couldn’t find the key to open the game.

Thankfully it only took first responders about 20 minutes to open the machine. Check out the clip below of the child inside the crane game. Hopefully, they let him have a toy after all was said and done.