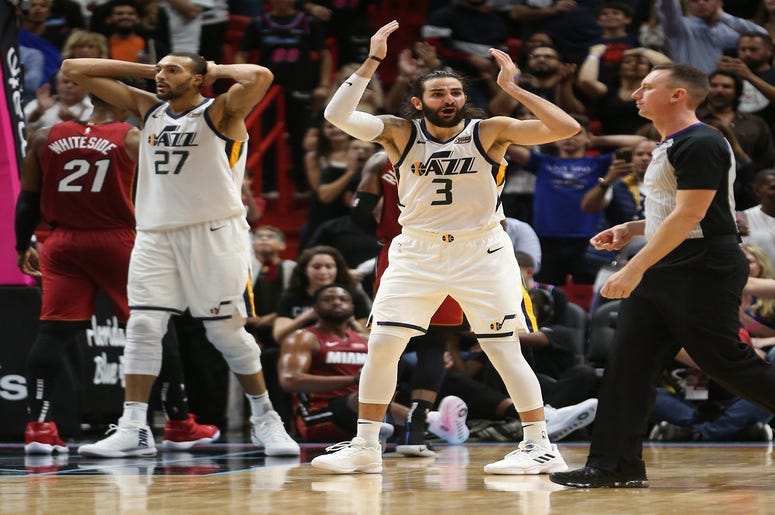 A mascot for a professional sports team has a number of duties throughout the game. From pumping up the crowd, to stadium antics, a mascot is tasked with being secondary entertainment for the fans at the stadium. In Utah, apparently animal control was recently added to their mascot’s to do list. Before Friday’s game between the Utah Jazz and Minnesota Timberwolves, a bat got loose in the stadium. After the bat escaped security for a while, the Jazz’s mascot, Jazz Bear, saved the day, capturing the swift moving bat with ease.

Jazz mascot nets bat on court before game vs. Timberwolves | via USA Today / This sets an unrealistic expectation for bears everywhere. https://t.co/JNSXnL0Xu0 pic.twitter.com/Num6UDAmLD

Hours before Friday’s game in Utah, a bat was spotted flying inside the Vivant Smart Home Arena, interrupting shoot around for a number of players. While some were stunned at the sight of the bat, most fans cheered and groaned while watching security try and fail at capturing the flying mammal. After a few attempts, the Utah Jazz’s mascot decided to get in on the fun, and give it a try.

Nobody can catch this bat flying around the arena ahead of the Jazz-Timberwolves tip-off, not even Jazz Bear. pic.twitter.com/U5obXEwmw5

Jazz bear grabbed a net and gave a few failed swings at capturing the bat. As it zipped around the court area, the mascot finally got a hold of the bat, catching it with one final swing of its net. Many were worried at first, as no one was able to catch the bat. One attendee wrote on twitter, “Nobody can catch this bat flying around the arena ahead of the Jazz-Timberwolves tip-off, not even Jazz Bear.” Of course Jazz Bear did eventually catch the bat, allowing the game to go on.

Update: Jazz mascot trapped the bat and then showed ⁦@JimPeteHoops⁩ his catch while the theme from Batman played in the arena 🦇 pic.twitter.com/6BiqEqNWUj

While many fans enjoyed the pregame entertainment of watching everyone try and capture the bat, the players on the court weren’t too pleased. The bat flying around the court interrupted some players shoot arounds, with Donovan Mitchell of the Utah Jazz saying, “I was not cool with that at all. I'm glad the Bear got him because I would not have finished my warmup. I would have gone to locker room if he was still flying around out there.” Mitchell wasn’t the only player to stop shooting once seeing the bat, but luckily for the players, Jazz Bear has got their backs.

This surprisingly isn’t the first bat related incident to take place at an NBA game. During a game on Halloween in 2009, San Antonio Spurs player, Manu Ginobili, famously swatted a bat out of midair. He then tossed the bat away, and continued playing the game, no longer being halted by a bat. As for Jazz Bear, he definitely won MVP of that night. Now the Jazz know, any future bats in the arena, they’ll have to deal with Jazz Bear.