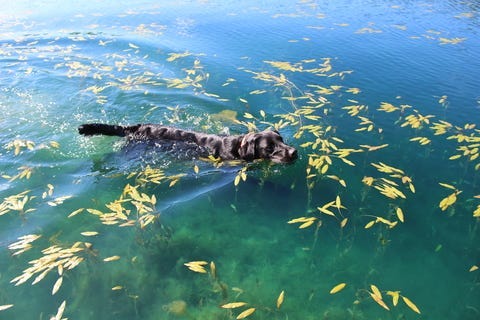 What are the odds of this happening?

It’s always nice when you take you fury best friend to the dog park and see them getting along with other dogs. It’s even cuter seeing them interact with other animals. In this case, it was a very unlikely friendship between a land lover and sea dweller.

A video was taken in Australia last weekend of a dog swimming and playing with a dolphin. No, this isn’t the plot for a Free Willy spin-off. As crazy as this sounds it did in fact happen.

A bystander was outside and noticed a black Labrador going for a swim in a nearby stream. At first glance they didn't think anything of it, then they saw a dolphin jump out of the water.

According to the description of the video, the animals were seen playing together and splashing one another as if they were friends. Soon after a crowd formed and started watching the two. Apparently, the animals played for about half an hour. Eventually, the dog swam back to his owner exhausted, while the dolphin jumped over the water one last time before disappearing, saying good-bye to his new friend.

If this were turned into a movie, what would the title be? Dog Meets Dolphin? Dolphin & Dog? Land & Sea? Check out the video down below.