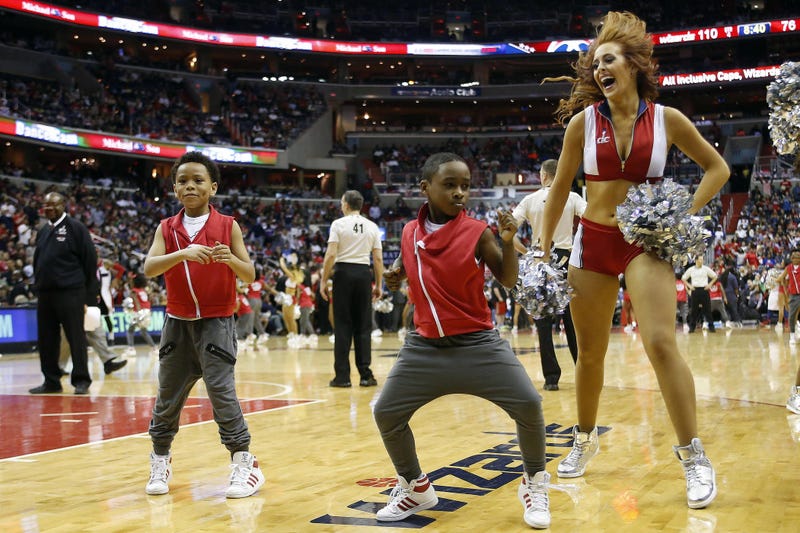 Just about every sports arena has their own way of interacting with the crowd; whether it’s the “Kiss Cam” or the “Dance Cam” every venue has something fun.

Over in Philadelphia, they hold Dance Off's among fans during the 76er’s basketball games. They happen all the time, but not every dance off goes viral.

These kids were just having a good time attending Monday night’s game, and then the dance cam came on.

The two, Dominic Prybella the kid with a cast on his arm and Anthony Stuard were sitting on different sides of the arena and starting busting out dance moves on the big screen. The camera started going back and forth between the two of them as the competition intensified.

At one point Prybella took off his shirt and began waving it in the air, Stuard then did the same thing and took his shirt off. The boys’ moves included The Floss and Orange Justice.

One of the boy’s parents didn’t know how to react once his shirt came off and he kept groovin’. "All of a sudden Dominic took his shirt off, which he's done before so I was OK with that. I wasn't surprised.” Said Prybella’s mother. Stuard's mom wasn’t sure what to do, “They kept dancing. Then all of a sudden, Anthony starts pulling his arms out and I didn't know what to do! I wanted to cover him up!"

So far the kids have been enjoying their 15 minutes of fame. Their video has been viewed more than two million times. Check out their dance moves down below, we could all learn a thing or two from watching them.

What a night at Wells Fargo Center 😂 #Sixers pic.twitter.com/xWg3cHHcWI