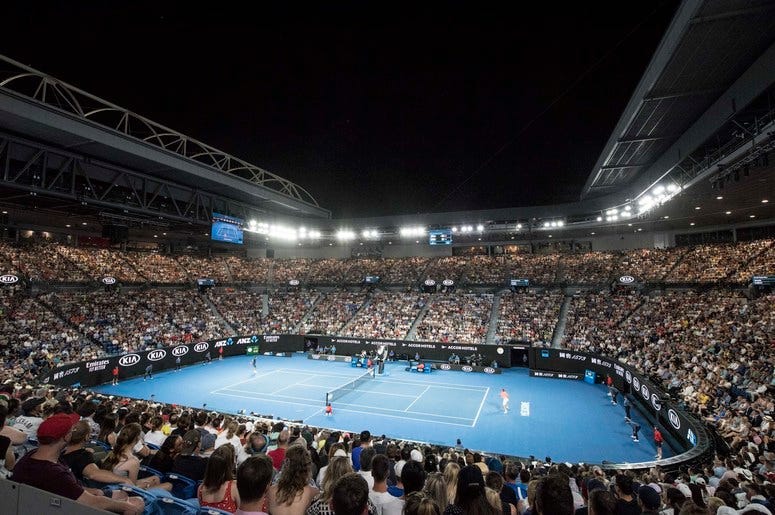 The Australian Open kicked off this week, but it seems the internet has already declared a winner. The three week long professional tennis tournament began on Monday, and while many were excited to get a chance to see icons such as Serena Williams, or Roger Federer play, it was the moves of a young ball boy that caught the attention of most fans. Twelve Year Old Skyler Benson decided to put his own spin on the pre-match coin toss, and the internet went crazy for it.

...did not expect that 😂#AusOpen pic.twitter.com/lse1gXZEDe

Right before the round one match between Kei Nishikori and Kamil Majchrzak, the two players met at the net for the coin toss. This is when young Skyler decided to add some flair to the normally bland tradition. He showed off some fancy footwork, and added a spin to his gentle coin toss. The referee and both players seemed to enjoy Skyler’s moves, as they all cracked a smile, and loosened up before the heated match.

The crowd in the stadium also enjoyed the kick and spin, as the crowd erupted in applause after Skyler performed his coin toss. Of course, those in the stadium weren’t the only ones to enjoy the coin toss, as soon after the video was posted on social media, many others’ got in on the enjoyment. One twitter user wrote, “That kid knows it’s his 15 seconds to shine & make an impression.”

Kid: Should I do a twirl?

Friends: Definitely don't do the twirl.

Amazing! Well played young fella!#AusOpen brings out the best in everyone. What a tournament!

That kid knows it’s his 15 seconds to shine & make an impression.

Skyler Benson saw his moment, and took it, claiming victory in the early stages of the Australian Open. While he was not allowed to play in the match, the internet is in agreement, his moves are deserving of a victory. There are 128 men and 128 women playing in this tournament, yet there is only one ball boy with the guts to put on a performance like that.

The Australian open is the first of the four major tennis tournaments that occur each year. The tournament takes place in Melbourne, Australia, and will wrap up towards the end of January. However, it seems everyone is in agreement that they might as well stop playing the rest of the tournament, and give the trophy to young Skyler Benson for his magical coin toss.