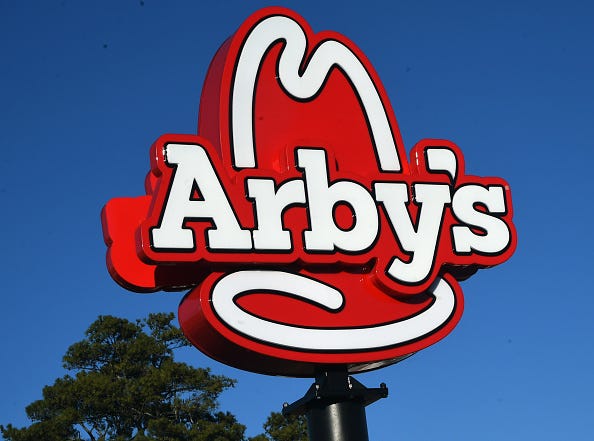 Arby’s got into some real beef with customers in Minnesota.

The fast-food chain is backpedaling after one of their restaurants put up a controversial sign warning that unruly kids would not be served, reported People.

Some diners visiting the chain’s Elk River, Minnesota location were none too pleased about being greeted with an aggressive message on the door.

"Only well behaved Children who can keep their food on their trays and their bottoms on their seats are welcome,” the sign read. “If you can’t do this you will be asked to leave."

Christine Hemsworth was worried she wouldn’t get served when she arrived at the restaurant with her three children.

“I was like ‘oh gosh,'” Hemsworth said. “I’ve got a two-year-old with me and he doesn’t always keep his fries on the tray or his bottom on the seat. He sometimes stands up.”

Not sure whats worse, the fact someone would hang this sign or the fact that it might be needed. #Arbyssign #Signofthetimes #WakeUpCLT pic.twitter.com/l5YaErzzjb

She also felt it was inappropriate since Arby’s isn’t exactly a fine-dining establishment and parents and kids make up a bulk of their customer base.

“I was shocked to find a sign like that. It is a fast food restaurant, it’s not something with white tablecloths. It’s supposed to be family-oriented as far as I knew,” she added.

Images of the sign were posted online and quickly drew mixed reactions.

One person commented, “I think this manager forgot the part where he/she works at a (expletive) ARBYS!!!”

Another took the restaurant’s side by adding, “So what about your patrons who agree with the sign in Elk River Minnesota? I'm tired of people and kids in your stores who are unruly and create messes.”

While a third played in down the middle by writing, “Not sure what's worse, the fact someone would hang this sign or the fact that it might be needed.”

To temper the backlash, Arby's issued an apology and confirmed disciplinary action was taken against the employees responsible for the sign.

"We recognize the language on this sign was insensitive. We removed it quickly, and have disciplined the manager and team working at the restaurant," Arby's said in a statement. "It does not reflect our company values and the family-friendly environment we aim to provide in all of our restaurants."