A father in New Jersey is sharing a scary, near-drowning incident his daughter expeirenced. He is now warning other parents about what could happen if they buy mermaid tail swimsuits for their children.

Adam Lisberg said his two daughters, Annabelle, 5, and Ruby, 7, were swimming in a children’s pool while wearing the accessory, a popular swim item that binds the legs together to create the illusion of a mermaid tail.

"The girls love mermaids - always have," Lisberg said to Today Parents. "We knew that with it blocking their feet it's harder to kick or walk - and they knew that - but we figured [the pool] is two feet deep. Even if they sit down they can get themselves up."

Despite regular supervision over the girls while they splash around in the pool, the girls managed to slip out of vision for long enough for Annabelle to be found unmoving in the pool while Lisberg tended to their son.

Annabelle spent two days in the pediatric ICU. Even a little water in the lungs, especially if it has chlorine, can spark a delayed reaction as the body fights the injury. She had a temperature and elevated pulse and breathing for almost a day after. Needed oxygen to kick it. 15/ pic.twitter.com/FIg9Dj2e01

"I'm thinking, 'This is not how it's supposed to end. It's a wonderful happy Sunday afternoon, the girls are having so much fun in the pool, it's not supposed to end like this,'" Lisberg recalled. "But when I got over to her, her eyes were wide, she wasn't moving, and at first I really thought she was dead."

Paramedics arrived quickly, and Annabelle ended up in the hospital for two days before being released.

Ruby later explained that when she realized Annabelle wasn't moving, she quickly got her sister out of the water. 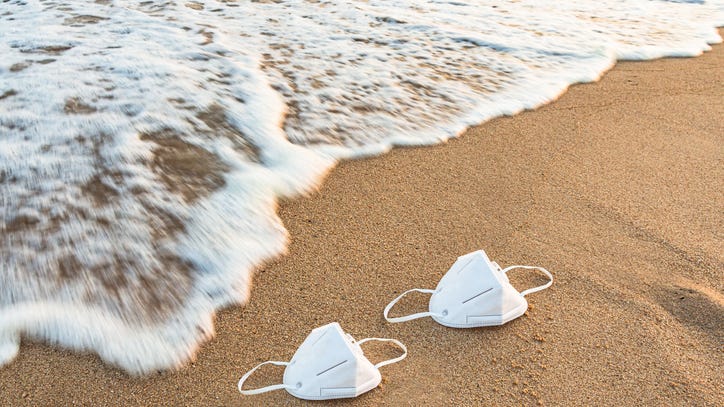 How to Keep Your Kids Safe at the Beach, Pool and Playground This Summer

"I wish she had shouted something, but her first instinct was to protect her sister and she did," Lisberg said.

Meanwhile, Dr. Suzette Oyeku, chief of the Division of Academic General Pediatrics at the Children's Hospital at Montefiore, agreed that the suits can be harmful.

"If a [toy or swimsuit] constrains their legs or arms and they are not able to float, then that can be a safety hazard for them," she explains. "Any kind of device going into the pool that will obstruct a child's ability to wade through the water is not advisable."