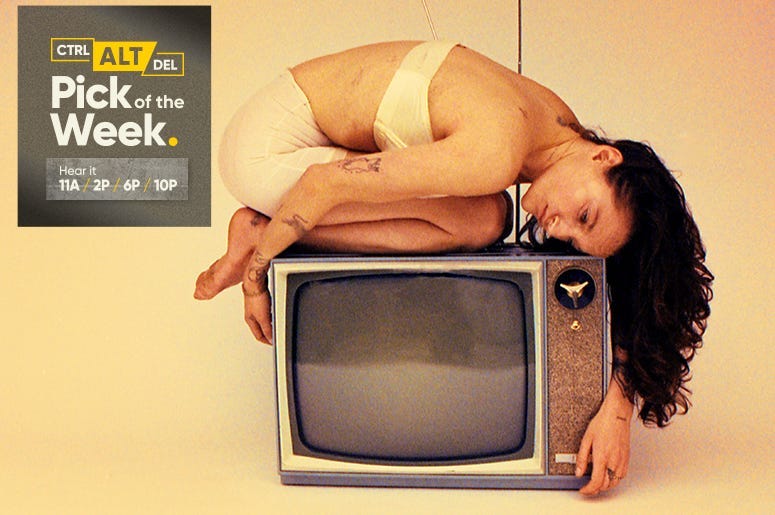 Listen with the RADIO.COM App | FAQ

When you hear the song played in the 11AM, 2PM, 6PM, and 10PM hours TEXT "Like" OR "Dislike" to 55701 (standard messaging rates may apply) during the song to let us know, in real-time, what you think.

There's no right or wrong; no win, lose, or draw -- we want to hear your feedback on new music!

About Royal & the Serpent:

In each piece of music she shares with the world, Los Angeles-based artist Royal & the Serpent reveals the wild duality at the heart of her artistry. A Gemini to the core, she’s passionate but pensive, sensitive but self-possessed, enigmatic but an open book when it comes to exposing what’s inside her mind. With the arrival of Castor and Pollux—her debut project for Atlantic Records—the singer/songwriter otherwise known as Ryan Santiago speaks to the incredible power of embracing your true nature, in all its outrageous complexity.

“I definitely feel like I’m two people living in one body, where I can just slip at the drop of dime and become a totally different person,” notes Santiago, who equally identifies as a “sweet sunshine angel” (i.e., the Royal persona) and a “freaky devil maniac” (the Serpent).

A two-EP release named for the mythological twins transformed into the Gemini constellation, Castor and Pollux unfolds with a kaleidoscopic breed of alt-pop informed by Santiago’s eclectic sensibilities (a voracious music obsessive, she lists everything from David Bowie to alt-R&B artist Allan Rayman to ’50s doo wop among her influences). In bringing the project’s gorgeously detailed sound to life, Santiago handled production duties with her frequent collaborator Marky Style, dreaming up a sonic aesthetic that’s frenetic and feverish one moment, elegantly composed the next—a fitting backdrop to Royal & the Serpent’s tempestuous lyrics.

On the dizzying lead single to Castor—an EP exploring her darker and more mercurial tendencies—Royal & the Serpent lets her strangest impulses shine, gracefully interlacing jagged textures and off-kilter beats and dubstep-inspired drops. Threaded with sometimes-ominous samples of vocal chatter, “Overwhelmed” spotlights the sheer magnetism of Santiago’s voice as she cycles through countless tones and moods with impossible ease. “When I wrote ‘Overwhelmed’ I was in a place of feeling really neurotic and overstimulated,” she says. “The song is sort of me explaining what my life was like at that moment—this feeling of needing to be in control of everything, and experiencing a constant sensory overload.”

While Castor and Pollux each reflect the joyful experimentation Santiago brought to the songwriting and production process, the project also spotlights the sophisticated musicality and powerful vocal command she’s cultivated for much of her life. Originally from New Jersey, she became a competitive dancer at the age of five and later transitioned into musical theater after shattering both her heel plates by jumping off a stage. When she was 14, Santiago got a guitar and learned to play from the then-six-year-old sister of her neighbor and longtime friend Donna Missal (a fellow L.A.-based singer/songwriter now signed to Harvest Records). “The Missals were always a very musically inclined family, and we got really close after doing plays together when we were young,” says Santiago. “At some point we started writing songs together, and we’d walk around with guitars and drums and shakers, singing to the whole neighborhood.”

Although Santiago wrote songs on her own all throughout her adolescence, she mostly kept her music to herself, even after relocating to Los Angeles at the age of 18. “It was this closeted talent I didn’t share with anybody—really, I didn’t even think it was a talent,” she says. But while bartending one night several years after settling in L.A., Santiago received a bit of life-changing encouragement from a co-worker. “He heard me singing a song I’d written and said to me, ‘What are you doing with your life? You need to do something with this,’” she recalls. With that co-worker ultimately taking the role of her manager, Santiago then outlined all the goals she needed to reach in order to set her music career in motion. “It would be stuff as small as ‘I need to change the E string on my guitar,’ or ‘I’m going to play an open mic next week,’” she says. “Once we started breaking everything down, it all just grew and grew from there.”

In September 2017, Santiago made her debut as Royal & the Serpent with “Temperance,” a spellbinding self-released track she wrote “a cappella by myself, walking to the bus stop one day.” As she continued turning out singles—and earning buzz with songs like 2019’s “Weddings & Funerals” and “Salvador Dali”—Santiago began making her name as a performer, taking her electrifying live show to venues across L.A. Her relentless dedication paid off in summer 2019, when a show at Hollywood dive bar Good Times at Davey Wayne’s caught the attention of Atlantic Records, who signed Royal & the Serpent by the end of the year.

Both fantastically grandiose and steeped in the raw intimacy of bedroom pop, the Castor EP showcases the tremendous depth of expression Santiago has achieved since getting her start as Royal & the Serpent. On “Can’t Get High,” for instance, she delivers an instantly iconic track fueled by the warped and throbbing beats of industrial music, an element beautifully offset by her sweet and beguiling vocals. “‘‘Can’t Get High’ came together when I was newly in a relationship and felt like nothing could make me feel the way this person made me feel,” says Santiago. “I didn’t want to drink, I didn’t want to party so much—I just wanted that feeling of falling in love.”

Elsewhere on Castor, Royal & the Serpent flaunts her madcap humor and whip-smart self-awareness, with the hypnotic and bass-heavy “Warn You” setting her often-unsettling confessions to a perfect sing-song melody. Meanwhile, “Choke” takes on a thrilling intensity, the track’s sonic landscape brilliantly embedded with frantic screaming and gasping for air. “I wrote ‘Choke’ at a time when I felt like my mind was taking control of me, like I couldn’t breathe,” says Santiago. “It’s sort of me singing to myself in the mirror—a song to my subconscious.”

With Pollux due out later this year, Santiago points to a profound period of growth she experienced in the making of the two EPs. “The first EP represents who I was a couple years ago, when I was a bit out of my mind—the bad Gemini, so to speak,” she says. “I’ve grown up a lot since then and my perspective has changed, so the second EP is much more like, ‘This is who I am now. I’m gonna be okay.’” And though she welcomes that transformation, Santiago hopes her music might inspire others to celebrate their messiest emotions. “When people hear these songs, I want them to have fun with them, and know that it’s okay to feel however they feel,” she says. “We all feel all a little out of control or crazy sometimes—that’s all just part of being human.”