Let's face it, summer is kinda canceled, so this holiday weekend we want to help you stay safe and bring the music to you - featuring exclusive sets from some of the biggest DJs and Producers in Alternative.

Hosted by our own Kevan Kenney, the virtual concert will be broadcast across all RADIO.COM Alternative stations on Friday, July 3 beginning at 10PM ET / 7PM PT. You can also listen at RADIO.COM/live and on the RADIO.COM app. 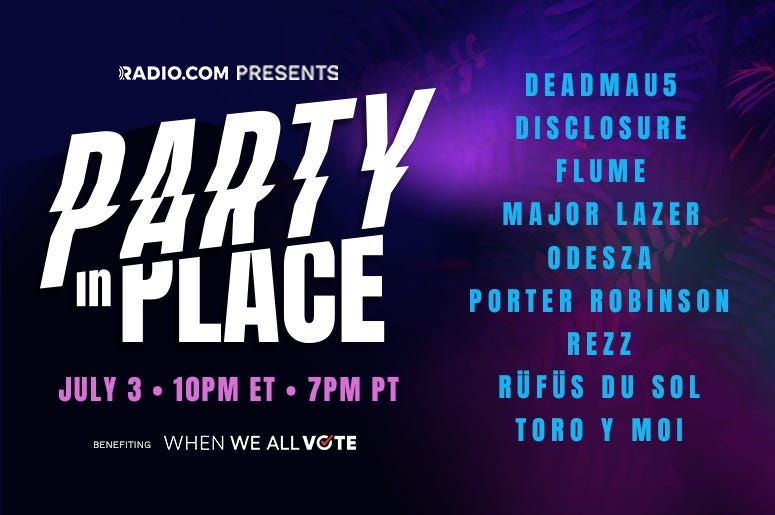 During this special broadcast we are encouraging fans to help raise funds for voter access through our partner When We All Vote -- a non-profit, nonpartisan organization on a mission to increase participation in every election and close the race and age voting gap by changing the culture around voting, harnessing grassroots energy, and creating strategic partnerships to reach every American.

A post shared by When We All Vote (@whenweallvote)

Party In Place can be heard right here and on the RADIO.COM app beginning at 10PM ET / 7PM PT on Friday, July 3.

Check out set times and more about our lineup below. 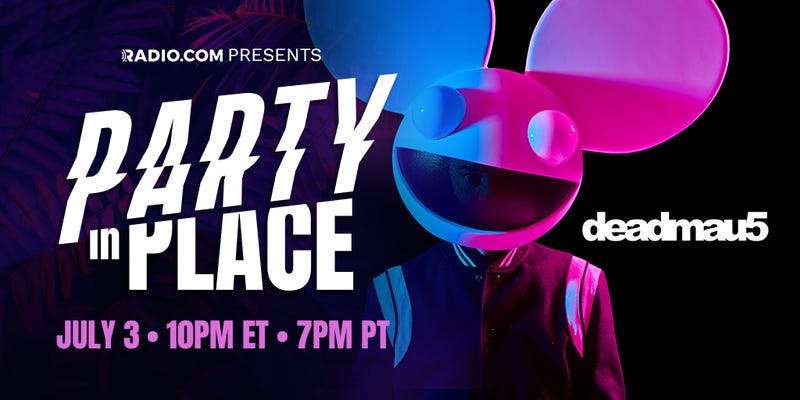 Joel Zimmerman, more commonly known as deadmau5, is one of the world's most respected electronic music producers of modern times. Enjoying international chart success with his platinum-certified single “Ghosts N Stuff,” as well as “Professional Griefers,” “Sofi Needs A Ladder,” and “I Remember,” he has also released seven critically acclaimed albums. The multiple JUNO Award-winning and GRAMMY-nominated artist's ability to push the boundaries of his talent grows at an equal rate to his fan base, which counts 15 million and more over his combined social media channels. 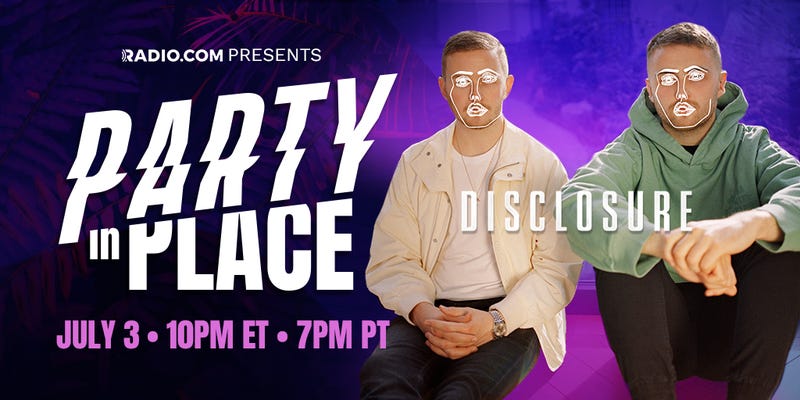 “Look! Where your focus goes, your energy flows. Are you hearing me? The title is everything,” Disclosure’s Guy Lawrence says of the fraternal duo’s exhilarating third album, ENERGY. “The thing that decided which songs made it and which songs didn’t was that one word: energy. Every track was written really quickly. That’s why we had to write so many songs because those ones don’t come up every day. Or every week. Or every month.”

This is a radical departure for Disclosure. For their first two albums, Settle (2013) and Caracal (2015), Guy and Howard Lawrence recorded only as many tracks as they needed, but ENERGY evolved out of an epic process of creation and distillation. The path to their shortest, most direct album - 11 songs, 39 minutes - ran through around 200 tracks: everything from drum loops to fully realised songs. “The idea came from seeing how Sam Smith works,” says Howard. “We thought, why don’t we do that? That’s a great idea! We didn’t see the really painful part, which is having to cut songs out.” “But that’s what makes a good record,”says Guy.“ How brutal can you be? How much time do you need to get your point across? All of the songs that didn’t make the album led us to the right songs.” 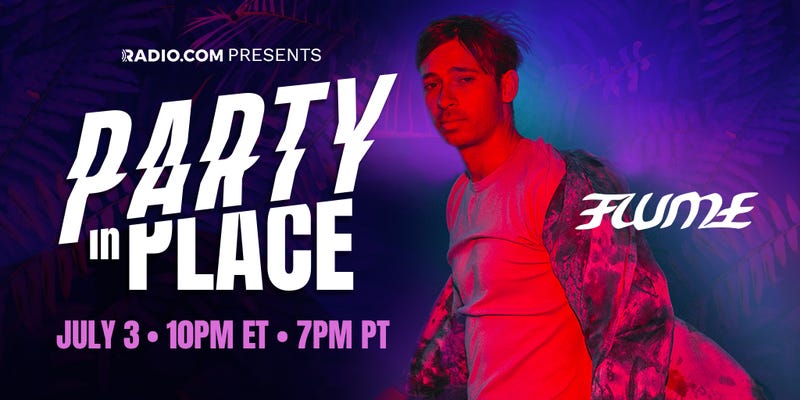 Flume rose to prominence as a teenager with his scene-starting self-titled debut in 2012. Featuring the hits “Holding On,” “On Top,” “Sleepless” and others, the album topped the ARIA charts, garnered four spots in triple j’s Hottest 100 and sold out a massive Australian 40,000 cap tour. In the two years that followed, Flume established a name as a serious international contender thanks to his compelling live show and skillful remixes of high-profile acts including Lorde and Disclosure.

His latest song, "The Difference," is a collaboration with Toro Y Moi. Speaking of the release, Flume says: “We made this song between a day at my place in LA and a day at Chaz’s spot in Oakland. This was our first time working together, I’ve been a Toro Y Moi fan for a while. His song ‘Talamak’ is a longtime favorite. I listened to that one a lot when I first started Flume as a project.” 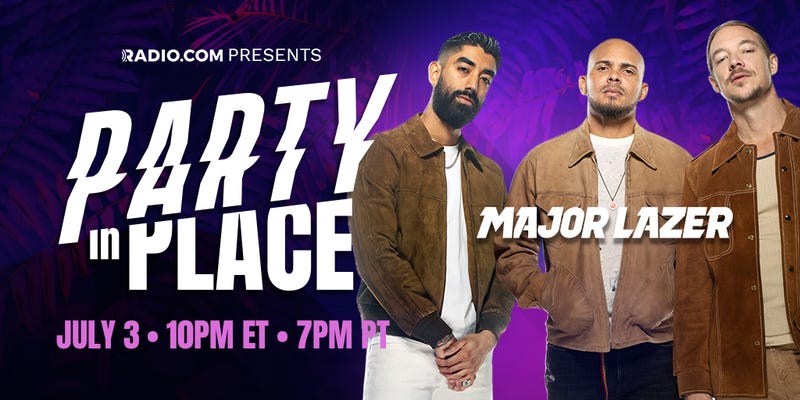 The group has always evolved and mutated to find new forms and ways of expression, with the red thread of Diplo being a constant in Major Lazer’s permeation of pop music culture. Now a GRAMMY award winner, Diplo’s ability to criss-cross genre and geography has made him a constant influence on heavyweights and rising stars alike. After first igniting fire with the masses in 2007 through M.I.A.’s "Paper Planes," Diplo has found himself making hits for some of the biggest stars across musical genres – it is his trademark to not only capture the zeitgeist, but to shape it. 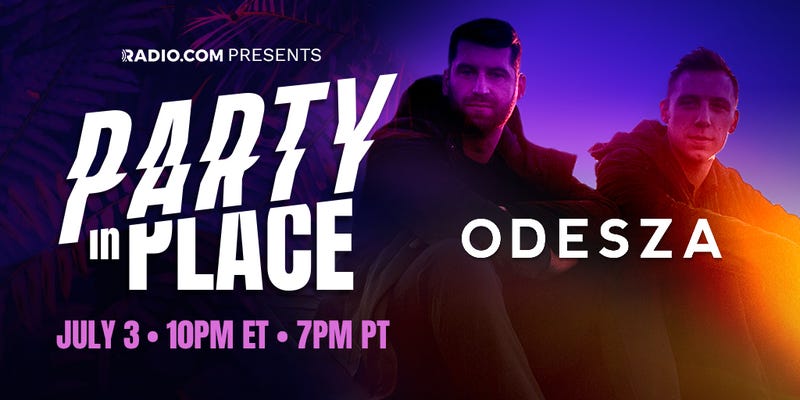 Production duo ODESZA, (Harrison Mills and Clayton Knight) began their meteoric journey when they first met and started making music together at Western Washington University in Bellingham, WA. They released their debut album Summer's Gone in 2012, a critically acclaimed project they completed near the end of their tenure at Western. It was followed by 2014's In Return, which debuted at the top of Billboard's Dance/Electronic chart and featured platinum single "Say My Name." A remix of the track by RAC was later nominated for a Grammy in 2016.

In the course of that eight-year span, they've gone from ground zero to selling out arenas [STAPLES Center (LA), Barclays Center (NYC)], and headlining iconic festivals including Coachella, Lollapalooza, Austin City Limits, Bonnaroo and Outside Lands. They've built their appeal through word of mouth and streaming, plus a unique live presentation featuring an 11-piece ensemble that includes a horn section and a marching-band drumline. 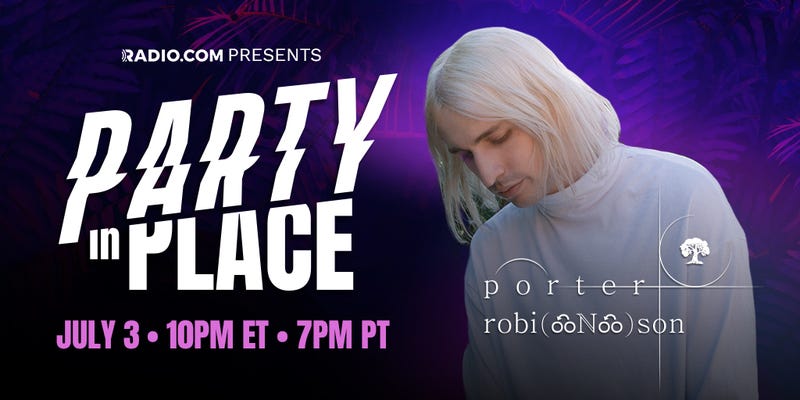 Everything’s changed since Porter Robinson’s 2010 arrival, from sonic landscapes to literal surroundings. Porter himself notes the immense effect of the exit from his childhood home on this new collection, shedding the comforting walls of his formative years, where 2014’s genre-defining Worlds crafted an expansion for the universe of electronic music. His own precocious arrival into the collective consciousness via co-signs from the dance music’s greats now feels like merely a footnote in the time spent since, with 2016 granting the union of Robinson and longtime friend Madeon to conceive the gold certified, anime-accompanied single “Shelter.” Just a year later he’d introduce alter ego, Virtual Self, a reinvention that landed him a GRAMMY nod and left incalculable influence in its wake. 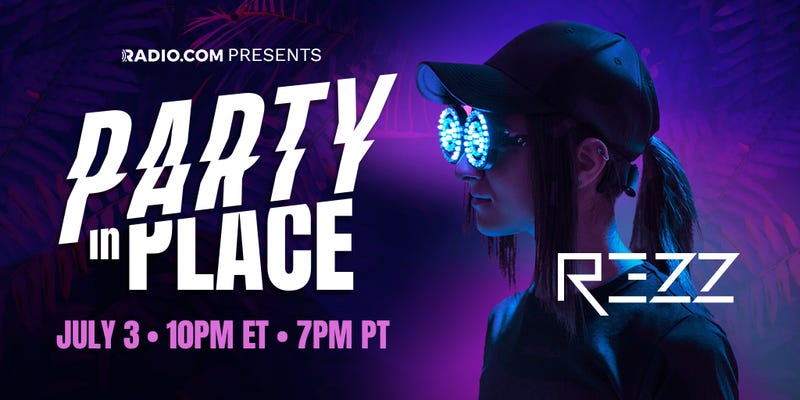 REZZ is the undisputed female leader of the electronic music world. Topping line-ups alongside mega-stars like Diplo, Marshmello, and ZEDD, REZZ stands with the best of her peers, but has a sound that’s all her own. She oozes originality and produces genre-bending electronic works, striking a sharp balance between bass-heavy and minimal tech compositions. 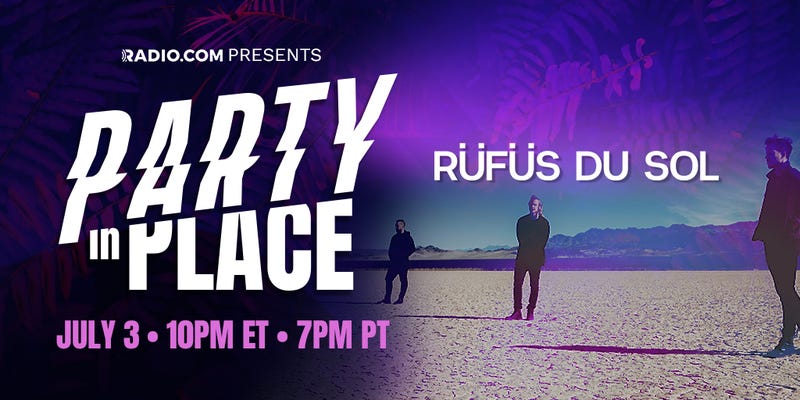 RÜFÜS DU SOL have emerged as one of the world’s preeminent live electronic acts. The Australian three-piece, comprised of members Tyrone Lindqvist, Jon George and James Hunt, have released two platinum-certified albums, ATLAS and Bloom, with their third album SOLACE ushering in a new chapter for the trio. 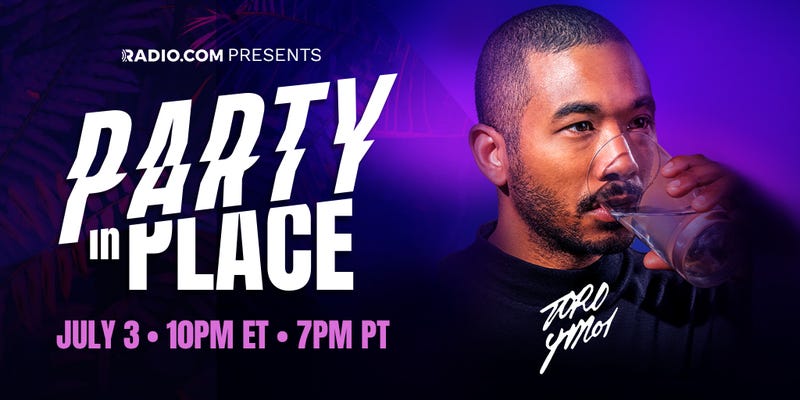 The most recent Toro y Moi album, Outer Peace, was written and recorded in the Bay Area after Chaz's return from a one year stint in Portland. It is somewhat of a homecoming celebration, filled with features by friends and saturated with a playfulness that had not previously been embraced in past Toro albums. Outer Peace stands in contrast to the more sparse and contemplative Boo Boo, an album recorded while in Portland in relative isolation. With Outer Peace, Chaz showcases his ability to remain on the cutting edge of music's evolution while not taking himself too seriously. There are contemporary hip hop references mixed in with funk, Euro dance and ambient elements, all interwoven expertly and retaining that quintessential Toro y Moi aesthetic. Outer Peace is the most recent step along Toro y Moi's journey, promising the listener a little slice of insight into the complex and dynamic mind of Chaz Bear.