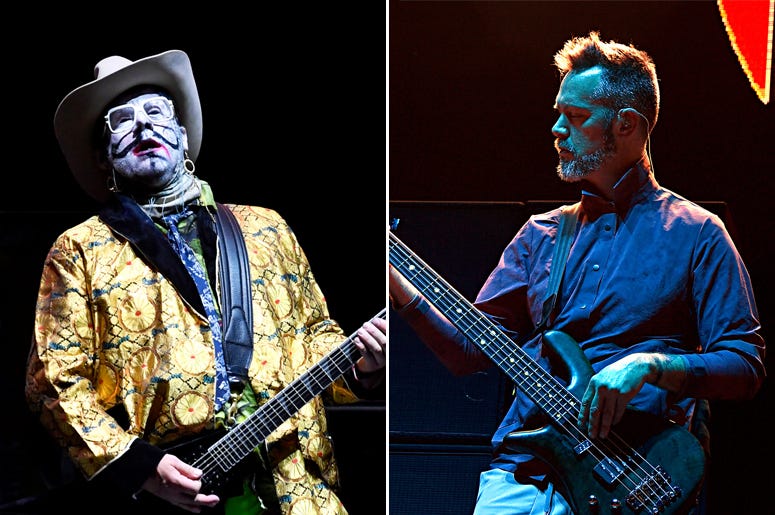 The Kings Of Quarantine are back with another classic to tug at your '90s heartstrings, this time taking on the 1987 Jane's Addiction classic "Mountain Song.".

This incarnation of the at-home supergroup features a snazzy looking Wes Borland of Limp Bizkit along with Louise Post from Veruca Salt, P-Nut from 311, Bill Kelliher from Mastodon, Richard Patrick from Filter, Burt McCraken from The Used, Tanner Wayne from In Flames, and Kevin Jardine from Slaves on Dope.

The Kings of Quarantine project has been put together by Slaves on Dope members Jason Rockman and Kevin Jardine along with Mastodon guitarist Bill Kelliher to support struggling members of the entertainment industry in the wake of the pandemic via the Roadie Relief GoFundMe. Currently, $66,397 has been raised of the $200,000 goal.

The group previously put together an equally epic cover of Faith No More’s "We Care a Lot" back in October 2020 featuring Frank Bello from Anthrax, Korn's Ray Luzier, Ivan Doroschuk from Men Without Hats, Dennis Lyxén from Refused, Walter Schreifels from Gorilla Biscuits/Quicksand, Kevin Sharp from Brutal Truth, Darryl McDaniels from RUN DMC, Esoteric from Czarface, Raine Maida from Our Lady Peace, and once again Filter's Richard Patrick.

Roadie Relief organizer Chad Ward explains the dire need for support, saying "Many of these crew members, 'roadies,' have been doing this as a career for decades. Some of these roadies, while experts in this field, have never had any other job experience. Since the world pandemic, well over a hundred thousand of these people are left with no income and no financial assistance."

You can download the songs right here, with proceeds benefitting Roadie Relief, after listening to it a hundred times like I just did.