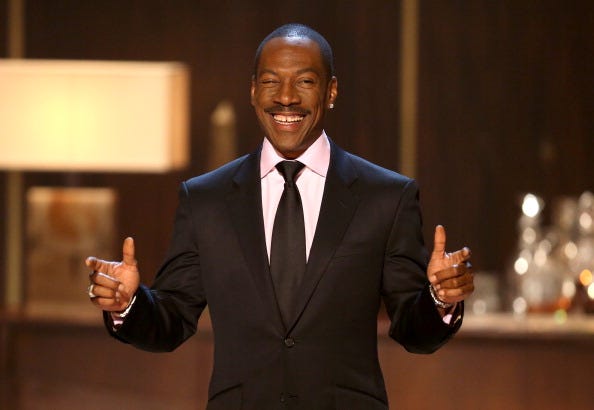 Eddie Murphy is being recognized for his incredible career. But there are parts about it that even Murphy himself has to laugh at.

On Sunday night, Murphy was honored at the Critics’ Choice Awards with the Lifetime Achievement Award. The ceremony aired live from Barker Hangar in Santa Monica, CA with host Taye Diggs.

“To make your living making people laugh is the highest blessing on Earth,” Murphy began.

To chronicle his nearly 40 years of movie-making, Murphy began to list off some of his most popular roles. “I’ve played everything: a cop, a robber, a doctor, different ethnicities, animals,” he began. “I’ve been a donkey. I’ve even played a spaceship once.”

The spaceship experience, it turns out, is not one that Murphy recommends, however. “When young actors come up to me on the streets and say, ‘Do you have any advice?’, I say, ‘never play a spaceship,'" he said the the laughs of the audience.

The actor continued, “I had a really great year. This is a great way to top the year off.” Murphy had another win alongside his Lifetime Achievement Award as his most recent film, “Dolemite Is My Name,” took home the Critics’ Choice Award for best comedy.

Murphy recently admitted, however, that some of his past projects really haven't aged well. Just a few weeks ago, during an interview with CBS Sunday Morning, Murphy revealed his thoughts on some of the jokes he used to make that don't resonate with a 2020 audience.