Martha Stewart hasn’t completely put her infamous stint in prison behind her.

The media mogul has revealed she still has the now legendary crocheted poncho she wore exiting Alderson Federal Prison in West Virginia in 2005.

Stewart served five months in the minimum security facility after being convicted on numerous felony charges, including conspiracy and making false statements in relation to the sale of stocks.

During an interview with People, the 79-year-old opened up about some of her more painful memories, which included her 1990 divorce and her time behind bars.

"Getting divorced was a terrible thing for me, because we were the first to divorce in my family. And that we haven’t spoken since the divorce is even more painful. But I’m very strong, and I’m very motivated to get on with life,” Stewart told the outlet.  “Even when I went away [to Alderson Federal Prison Camp in West Virginia] for five months, I got through it. I learned how to crochet. I still have the gorgeous crocheted poncho [that I wore leaving prison]. It’s in the attic.” 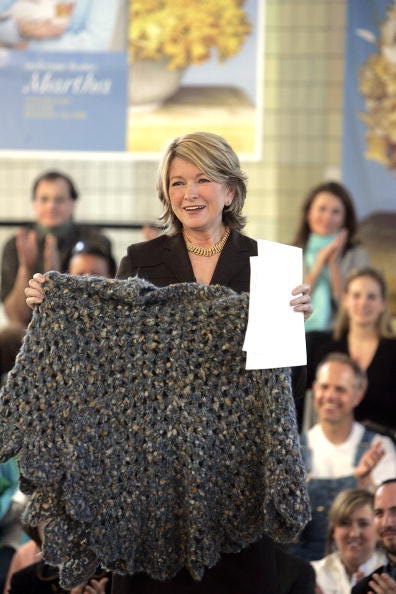 She added: “And I reupped my ceramics there. I had done a lot of ceramics as a child, and we had this fabulous ceramics studio in West Virginia, and I made an entire crèche scene. That’s my best memory."

Stewart previously disclosed how the "prison" poncho was made by one of her fellow inmates at Alderson.

"This was made by a friend of mine, a wonderful lady," the “Martha & Snoop's Potluck Dinner Party” host told the New York Times. "The yarn came from the commissary. The night before I left, she handed me this — not wrapped, because there is no wrapping paper — and she said, 'Wear it in good health.'"