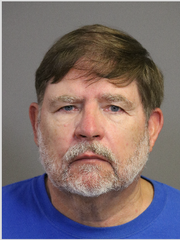 Police in Orange County need help looking for more possible victims of an alleged child predator who worked with children at a church.

Mark Allen Korando Sr. is currently in custody at the Orange County Jail on $1 million bail.

The girls were later interviewed with the assistance of the Child Abuse Services Team and detectives learned Korando allegedly sexually assaulted both victims starting approximately two years ago, according to the release.

He’s accused sexual acts with two girls – the charges so graphic so graphic we can’t even say them. He allegedly abused the girls over a two-year period.

“During the course of our investigation, detectives learned that Korando is a member of a local church here in Costa Mesa. So through that role he would chaperone groups of girls on trips out of state,” Roxi Fyad, a spokesperson for the Costa Mesa Police Department, says. “That is why we are seeking the public’s assistance in identifying potential additional victims that Korando might have had access to through his involvement with the local church.”

According to the police press release, “During the course of the investigation, CMPD detectives also learned Korando is a member at a local church at the 1700 block of Baker Boulevard, where he would chaperone groups of girls on trips out of state to provide aid and support for communities in need.”