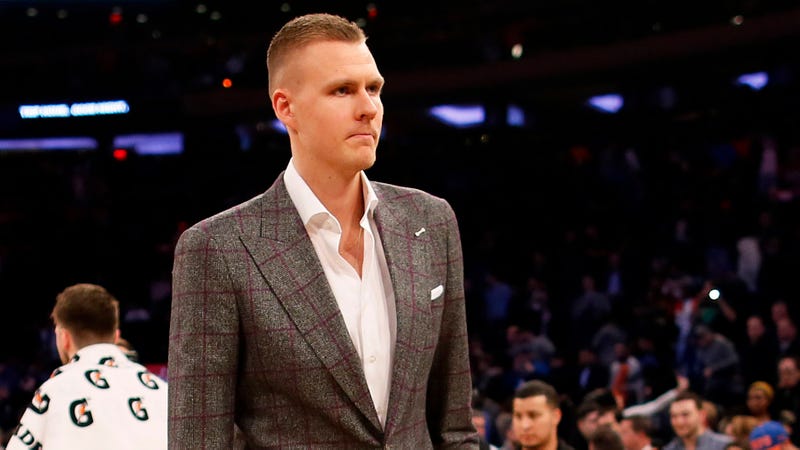 DALLAS (105.3 The Fan) -- If it were up to Mark Cuban, star arrival Kristaps Porzingis and rookie phemom Luka Doncic will be Dallas Mavericks for a long time.

After the Mavs acquired Porzingis from the New York Knicks in a trade last week, conflicting reports came out about whether or not the 7-foot-3 big man would sign a contract extension in the offseason, when he's slated to become a restricted free agent.

Porzingis was asked at Monday's introductory press conference whether he would sign an extension, and Cuban jumped in to answer.

"I can answer that for you. Yeah, he does," the Mavericks owner said.

Porzingis responded by saying, "There you go."

When asked if that were true, Porzingis said, "We're on the same page. Don't even ask."

Porzingis was then asked whether it would be a long-term or short-term deal, to which Cuban again jumped in and replied, "Long-term, for sure. ... Our goal is to keep these two guys together for the next 20 years."

Porzingis talked about how excited he was to be playing with Doncic, even as he confirmed he would be out for the rest of the season as he continues to recover from a torn ACL suffered in February 2018.

"I get excited every time I think about it. I think we can be something special," Porzingis said of playing with Doncic. "I believe that if we do play together long-term -- we clicked from the beginning -- and I think that's going to translate on the court."

But by the time Porzingis returns to the court in September, it will have been nearly 20 months since he last played in an NBA game.

"Obviously, I expect there to be some rust," Porzingis said. "I'm a guy that visualizes a lot. Hopefully, I'll be quick to get back in a rhythm."

When asked to further clarify the plan, Porzingis opened up a little bit on his health.

"As Mark said, we're going to sit down and evaluate the whole situation and make a plan for my rehab," Porzingis said. "I feel great, but we're taking our time. There's no rush. I've been patient this whole time and I'm going to keep staying patient, which is one of the hardest things for me to do. We're going to make the right decisions."

Cuban later said in an interview on the "Ben and Skin Show" that Porzingis' camp had constructed a rehab plan that never called for him suiting up for the Knicks this season.

"He had already put together a plan. That basically defined his rehab so that he would not play this season. ... That's how he structured his workout schedule," Cuban said. "That's what they had worked out with the Knicks so there was no reason not to stick with it."

Porzingis also was asked about become teammates with Mavericks legend Dirk Nowitzki, a trend-setter as a European player in the NBA and a big man who could shoot. Cuban later suggested this might be the 40-year-old Nowitzki's final NBA season.

“Dirk is a guy I looked up to growing up," Porzingis said. "I’ll use every moment I can to bother him and ask questions.”