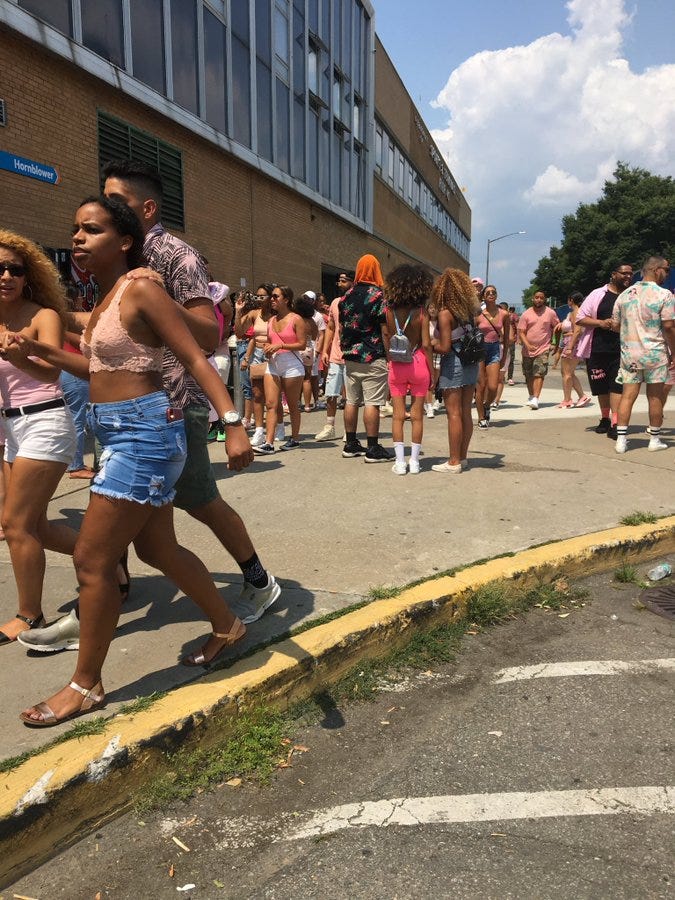 NEW YORK (1010 WINS) – More than a dozen people were hurt Saturday when the party boat they were on became a booze-filled madhouse, with people puking and acting so wildly that the boat’s two-hour tour of New York Harbor had to be canceled, officials and witnesses say.

The Hornblower Cruises boat had an unlimited breakfast buffet with an open bar from 9 to 11 a.m. It was scheduled to depart Pier 40 at 11 a.m. for a trip around the harbor.

A cruise spokesperson said the boat was going to travel around the Statue of Liberty and return by 1 p.m. But passengers on board got so drunk that the boat never left the dock because it was deemed unsafe. Instead EMS was called for possibly dehydrated passengers who were sloshed to the gills.

“Unfortunately this morning, a few passengers had a little too much fun in the sun, and out of an abundance of caution, EMS were called. We thank our first responders for their swift response,” the spokesperson said in a statement.

“No drugs, no drugs. But people got way too drunk and the boat didn’t even sail. That’s a problem!” one man who was aboard the vessel said.

“It was a two-hour happy hour, so that’s where it all got a little crazy,” said another passenger.

There were about 150 passengers aboard the party boat, an FDNY official told 1010 WINS.

The FDNY said 15 people were injured and that four of them had to be taken to area hospitals.

Eleven of the patients had moderate injuries and four of them had minor injuries, according to the FDNY. The nature of their injuries wasn't immediately known.

One witness took to Twitter, describing a “legit insane” scene of “cracked heads, knees.” She said “people were legit dropping” by 11 a.m. “People legit getting carried out on stretchers, someone jumped from the third deck to the first.”

Samantha Soto said she was disappointed her cruise was cut short.

“You know you spend about like $40, $50 on a ticket, so you expect to go out and get the full experience,” she said. “But it is what it is. You just roll with the punches.”