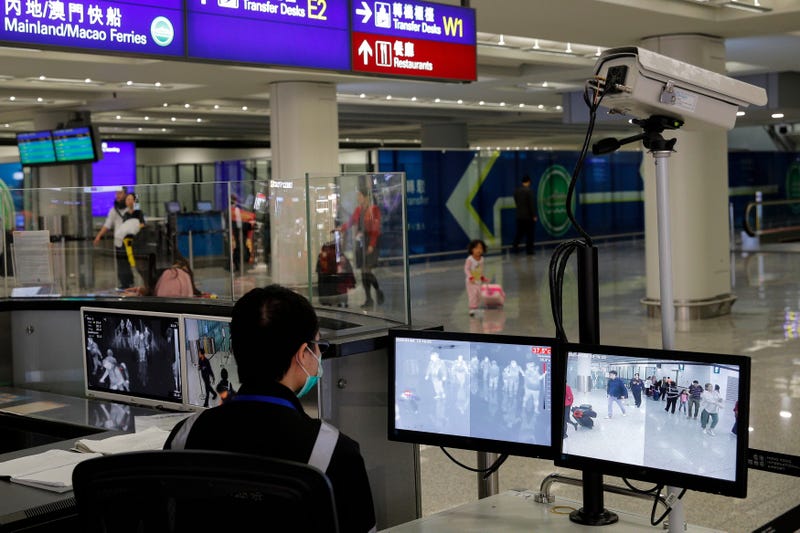 Photo credit FILE - In this Jan. 4, 2020, file photo, a health surveillance officer monitors passengers arriving at the Hong Kong International airport in Hong Kong. A preliminary investigation into viral pneumonia illnesses sickening dozens of people in and around China has identified the possible cause as a new type of coronavirus, state media said Thursday, Jan. 9, 2020. In Hong Kong, 15 patients with symptoms of respiratory illness were being treated as of Sunday. (AP Photo/Andy Wong, File)
By Adam Warner , 1010 WINS

"The State Department of Health currently has four persons under investigation for novel coronavirus that are under isolation as their cases are being tested at the CDC," Cuomo said. "So far, one of these cases has been proven negative and three are still pending. While the risk for New York is currently low, the Governor is calling for increased vigilance to ensure New Yorkers are protected."

He continued, "As we learn about the first confirmed cases of this novel coronavirus in the United States and potentially in New York, I want to assure New Yorkers that we are prepared. We are undertaking a wide-reaching and rigorous effort with all stakeholders, including healthcare providers, airports and federal health officials, to put in place the appropriate precautions to keep New Yorkers safe. The symptoms of this virus are very similar to a common cold - if you are concerned that you might be ill, please follow our guidance to protect yourself and others."

Meanwhike, Mayor Bill de Blasio will meet with health officials on Friday to discuss the city’s response to any potential cases of the deadly coronavirus, which has shut down parts of China and led to fears of an epidemic.

The mayor will meet with members from the Department of Health, NYC Emergency Management, the FDNY and the NYPD on Friday morning to talk about how the city will respond if the virus makes its way to the city.

New York City is home to some 8.6 million people and health officials are taking a proactive approach to responding to the disease. Many people are traveling this week for the Chinese Lunar New Year, which begins Saturday.

A case has already been reported in a man in Washington State; officials said they’re monitoring 43 people he had contact with.

In New Jersey, Hackensack Medical Center said late Thursday that a patient that initially thought might have the coronavirus does not have the disease.

“After an evaluation of the patient and consulting with the State Department of Health, experts have determined the patient does not have the Wuhan Coronavirus. Due to patient privacy, we are unable to provide additional information," the hospital said in a statement Thursday night amid fears the disease had made its way to New Jersey.

The coronavirus has made its way into the human population via animals—officials believe it was spread in Huanan Seafood Market, a market that sells wild animals in the central Chinese city of Wuhan. Humans do not have immunity to the disease.

Many countries are screening travelers from China and isolating anyone with symptoms. John F. Kennedy International Airport in Queens is among the airports screening passengers.

Meanwhile, China announced Friday that it is swiftly building a 1,000-bed hospital dedicated to patients infected with a new virus that has killed 26 people, sickened hundreds and prompted unprecedented lockdowns of cities during the country's most important holiday.

On the eve of the Lunar New Year, transportation was shut down in at least 13 cities home to more than 36 million people. The cities are Wuhan, where the illness has been concentrated, and nine of its neighbors in central China's Hubei province.

Authorities were taking precautions around the country. In the capital, Beijing, major public events were canceled, including traditional temple fairs that are a staple of Lunar New Year celebrations. Beijing's Forbidden City, Shanghai Disneyland and a slew of other tourist attractions have been closed indefinitely.

The number of confirmed cases of the new coronavirus has risen to 830, the National Health Commission said. Twenty-six people have died, including the first two deaths outside Hubei and the youngest recorded victim.

Initial symptoms of the virus can mirror those of the cold and flu, including cough, fever, chest tightening and shortness of breath, but can worsen to pneumonia.

The vast majority of cases have been in and around Wuhan, but people who visited or had personal connections to infected people were among the scattered cases counted beyond the mainland. South Korea and Japan both confirmed their second cases Friday and Singapore confirmed its third. Cases have been detected in Hong Kong, Macao, Taiwan, the United States, Thailand and Vietnam.