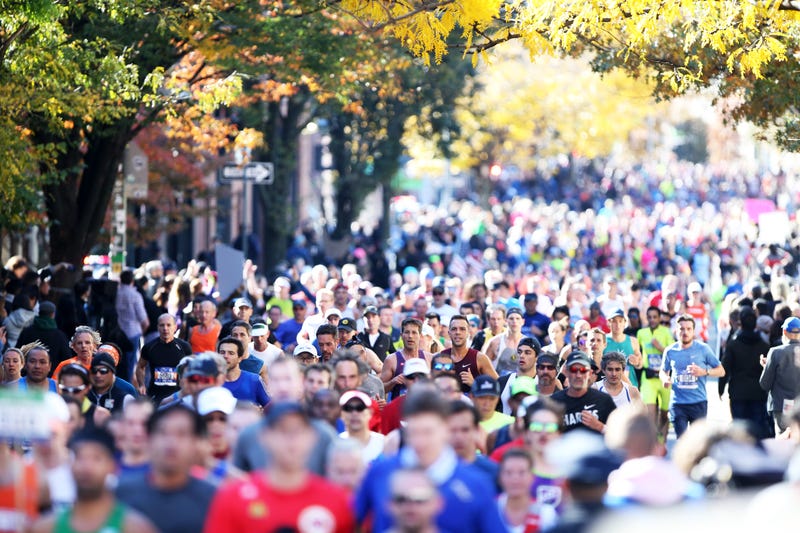 Follow the race from start to finish on 1010 WINS! Listen live here.

The runners couldn't ask for better weather for their trek through the boroughs. Sunday is forecast to be sunny with temps in the 40s in the morning before climbing into the 50s by afternoon.

The race kicked off at 8:30 a.m. With such a huge turnout and President Trump in town for a high-profile UFC match at Madison Square Garden, New Yorkers can expect several street closures.

Look at the wave 1 runners taking on the Verrazzano Bridge! Inspired? Enter our special-edition drawing for the 2020 #TCSNYCMarathon right now for the chance to be one of the 50 people to gain entry to the next year's race - our 50th anniversary! https://t.co/WJxIZe1JQT pic.twitter.com/SA2cEtthGm

Joyciline Jepkosgei powered away from four-time winner Mary Keitany to win the women's title at the New York City Marathon in her first race ever at 26.2 miles.

Jepkosgei crossed the finish line in Central Park in 2 hours, 22 minutes and 38 seconds Sunday, seven seconds off the course record.

The 25-year-old Jepkosgei holds the world record in the half-marathon but had never run this distance. The Kenyan pulled away from countrymate Keitany with about three miles to go. Keitany collapsed after finishing 53 seconds later.

Jepkosgei is the youngest winner in New York since 25-year-old Margaret Okayo in 2001. She also won the New York City Half-Marathon in March and is the first runner to win both events.

Joyciline Jepkosgei 🇰🇪 is your 2019 #TCSNYCMarathon champion in the women’s open division!

This follows her win at the #UnitedNYCHalf in March! pic.twitter.com/kTOaf6bibT

Geoffrey Kamworor of Kenya has won his second men's title in three years at the New York City Marathon.

Kamworor crossed the finish in Central Park at 2 hours, 8 minutes and 13 seconds Sunday.

He pulled away from countryman Albert Korir in the 24th mile. Korir finished second, and Ethiopian non-elite runner Girma Bekele Gebre was third.

The 26-year-old Kamworor finished third last year after winning in 2017.

He was greeted at the finish line by training partner Eliud Kipchoge, who completed the first sub-2 hour marathon last month — a feat accomplished under conditions so tightly controlled it didn't qualify for the record books.

Kamworor, also the world record holder in the half-marathon, is the 10th multi-time winner.

Desisa, who is from Ethiopia, was in 17th place at the seven-mile mark before leaving the course. It was 45 degrees F (7 degrees C) at the start of the men's race, ideal for marathoning.

In the women's race, Joyciline Jepkosgei powered away from four-time winner Mary Keitany in her first race ever at 26.2 miles.

.@GKamworor 🇰🇪 is 🔙🔛🔝! He is once again your #TCSNYCMarathon champion in the men’s open division! pic.twitter.com/EcxPKCNQOw

After rolling ahead of the record pace for much of Sunday's race, Schär crossed the finish about a minute off the mark at 1 hour, 44 minutes and 20 seconds.

Daniel Romanchuk of the United States repeated as men's wheelchair champion in another tight finish over Switzerland's Marcel Hug.

Romanchuk held off Hug with a final sprint through Central Park, crossing the finish line in 1 hour, 37 minutes and 24 seconds. Hug was one second behind for a second straight year, and Germany's David Weir and American Aaron Pike were also within 10 seconds.

Last year, Romanchuk became the first American and youngest competitor to win the men's division as a 20-year-old. He followed with victories this year at the Boston and London Marathons. Hug took the New York title in 2016 and 2017.

.@manuelaschaer 🇨🇭makes it 3️⃣ in a row! She is your 2019 #TCSNYCMarathon champion in the women’s wheelchair division! pic.twitter.com/7Diw7ftebQ

Start spreading the news! #TCSNYCMarathon Wave 1 runners on their way to @CentralParkNYC! pic.twitter.com/tBNdvWCwNI

Runners were being cheered on by a million of spectators and thousands of NYPD officers.

Despite an increase in online ISIS propaganda, authorities said there were no specific threats.

More than 140 countries are represented but many locals are taking part too.

Among them is 86-year-old Ginette Bedard from Howard Beach. This is her 17th NYC Marathon—she started running the race at 69.

"I don't want to get old and end up in a wheelchair," Bedard said. "So this keeps you away from the wheelchair."

52,000 runners have come to Staten Island this morning to begin their 26.2 mile journey at the #TCSNYCMarathon. Months and months of hard work and dedication has led each and every runner here, to this start line. Anticipation is in the air and we are so excited! pic.twitter.com/zcOx8NdRdN

Kelly Bishop from Milton, Massachusetts, told 1010 WINS that she hopes to run the marathon in about 4 hours and 5 minutes. She hasn’t run a marathon in 18 years and has always wanted to do so in New York. It’s also for a good cause.

“I feel lucky to run in New York,” Bishop said. “I’m doing this for GoodSports. It raises money for kids less fortunate and helps them be able to play sports. And I’m ready to rock this tomorrow.”

Bishop was one of 50,000 runners starting the race at the Verrazzano Bridge Sunday morning.

Sam from Brooklyn said Saturday that she plans on getting a lot of rest and loading up on carbs before the exhausting—but rewarding—adventure.

She said that by the end of the marathon “you’re just so depleted, because you just dug so deep for all of your emotions, all of your thoughts. Everything is just off of you.”

But she said there’s also a great euphoria that makes the challenging race all worth it.

Many runners were hanging out at the Marathon Expo at the Javits Center on Saturday to get health and wellness info and other goodies before a big pasta feast at Tavern on the Green Saturday night.

And we’re back for Day 2 of the #TCSNYCMarathon Expo Presented by @NewBalance! Stop by the Javits Center today to pick up your race materials, attend a course strategy session, and treat yourself to running gear. (But remember, nothing new on race day!!) We’re open until 8:00pm. pic.twitter.com/RWyWRDKwxk

Trisha from California was excited too. She and her friends planned to do some last-minute prep by getting a good meal Saturday night.

“We’re going to carb load and throw in some plants, some avocados, veggies,” she said.