BREAKING: THERE WILL BE A CURFEW ON TUESDAY, MAYOR BILL DE BLASIO ANNOUNCED LATE MONDAY NIGHT. IT WILL BE 8 P.M. TO 5 A.M.

Protesters calling for justice for George Floyd took to the streets of New York City for a fifth day in a row on Monday.

Protests were expected to take place in neighborhoods across New York City, including Times Square, the East Village, Bay Ridge and Crown Heights. Around 400 people were arrested during Sunday’s protest. See below for live updates from Monday's protests.

10:40 p.m. Pedestrians pass a Starbucks with broken windows in Manhattan.

On the same block, someone smashed the storefront of a Starbucks. pic.twitter.com/l2rathK2zx

10:30 p.m. A peaceful protest passes by the Brooklyn Museum.

The same protest march is walking East on Eastern Parkway in Brooklyn. Though a small contingent broker off, there’s still at a few thousand . pic.twitter.com/GqsRgZy98J

Video from a source of NYPD arriving on the scene as looters were in the Macy’s on Herald Square pic.twitter.com/KX4CZOuqZO

crowd stopped outside of 77th precinct on Bergen and Utica. chants of “who do you protect? who do you serve?” but no real tension yet pic.twitter.com/8mQA97EjKO

The looting is out of control. All over Manhattan stores smashed and grabbed. Just drove past the Verizon on 17th st and 6th Avenue where all the merchandise was swiped. Down the street @NYPD is arresting several individuals involved @CBSNewYork pic.twitter.com/4TDz71yGLL

This is the #brooklynprotest on Fulton and Nostrand tonight before the curfew. Peaceful and powerful, black-led. ✊🏾 pic.twitter.com/KOBkohjeVr

Police lost their patience with the heckling protesters outside the police line, who were obstructing traffic on 6th Ave outside Radio City. They said everyone would be arrested, charged the crowd and then made no arrests. #nycprotests pic.twitter.com/WWAjWLA4AR

9:10 p.m. Verizon and Microsoft stores in Manhattan are vandalized.

9 p.m. Looters swipe clothes and sneakers from a store in Union Square.

Chaos already by Union Square. Looters pouring in and out of boarded up Zumiez apparel store. Nearby, people are jamming sneakers and clothes into their backpacks. It’s like a shopping spree. #nyc #looting pic.twitter.com/zT9En6Y5DE

8:40 p.m. Looters steal from a store near Union Square in Manhattan.

Uncontrollable amounts of looting going on now at 14th St and fifth Ave. Stores being empties by hundreds of people. pic.twitter.com/0bvAu95Mj9

8:40 p.m. Protesters cross over the Brooklyn Bridge into Manhattan.

Manhattan-bound protesters crossing Brooklyn Bridge in both lanes. Cops are staying far behind and letting them march as they please, at least for now. pic.twitter.com/wZyGI6diBn

8:30 p.m. A small group appears to loot a Duane Reade store in Manhattan.

And just like that, Manhattan protest has turned ugly. Three stores smashed, Duane Reade being looted in front of me pic.twitter.com/wq44W27GyB

Sooo the markets were up today. Also the Yankees store getting looted is poetic. #NYCProtest #NYCRiots pic.twitter.com/5ye7MoDe76

8 p.m. A small group attempts to loot an Aldo store on 5th Avenue in Manhattan while others try to stop them. "That's not what this is about," one attendee can be heard saying.

Some young men just tried to loot an Aldo on 5th Ave when other protesters grabbed them, pulled one guy out the store window, and made them stop. An argument about looting then ensued. #NYCProtest #GeorgeFloyd pic.twitter.com/cQaG7GHMtR

NYPDs top cop deescalated a situation himself. It started w/ a fight & gun found, police say. Cops blocked an exit to Washington square park. @nypdchiefofdept said let them go. 2 water bottles were thrown at cops. Protesters said STOP. Then he spoke. They said kneel w/ us. He did pic.twitter.com/eZFFa4JE8W

7:45 p.m. A crowd marches down Flatbush Avenue in downtown Brooklyn. 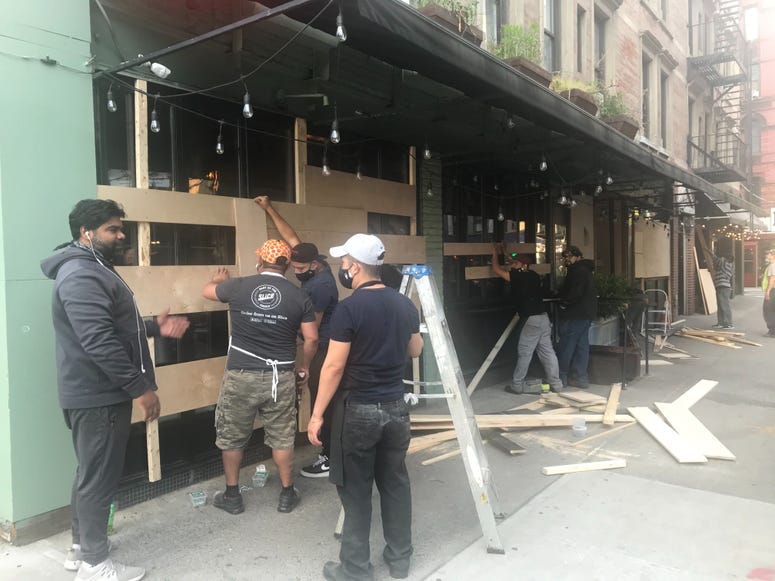 7:30 p.m. Protesters gather for a silent vigil in McCarren Park.

The power of a different kind of protest. Total silence in McCarren Park as thousands gather for a silent, socially-distanced message about police brutality. #brooklyn #nyc pic.twitter.com/alHbSo0ytU

7 p.m. Black Lives Matter protesters chant, “Who do you protect? Who do you serve?” outside the 77th Precinct in Crown Heights, Brooklyn.

Thousands of Black Lives Matter protesters have paused outside the NYPD’s 77th Precinct stationhouse at Utica and Bergen in Brooklyn.

They’re chanting “WHO DO YOU PROTECT? WHO DO YOU SERVE?” pic.twitter.com/KlZRWrlz2O

6:45 p.m. Workers board up businesses in Midtown, Manhattan.

Throughout midtown, seeing businesses being boarded up. #1010WINS pic.twitter.com/VggI7Ieejg

We’re at a #BlackLivesMatter rally on Ave D in the East Village, where there is singing, chanting, speakers ... heading down Ave C now pic.twitter.com/oWpwEcIia8

6:30 p.m. Protesters hang a sign reading “PRIDE IS A RIOT!” on the facade of the Stonewall Inn in Greenwich Village.

Huge crowds outside NYC’s Stonewall Inn are chanting “pride is a riot” as protests - so far peaceful - continue pic.twitter.com/zYR0l1lGdk

5 p.m. A march kicks off in Bedford-Stuyvesant in Brooklyn.

5 p.m. A crowd gathers at Grand Army Plaza in Brooklyn.

3 p.m. Protests were expected to kicked off in Times Square at 3 p.m.