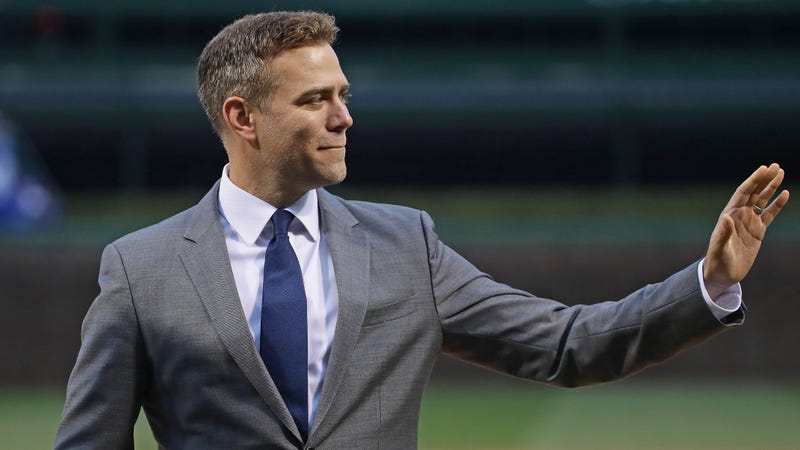 CHICAGO (670 The Score) -- The first home run of spring training has already been hit, and it came from Chicago Cubs president of baseball operations Theo Epstein.

And he got all of it.

Tuesday was a defining performance from him in Mesa, Ariz., one with a value to the franchise beyond wins and losses, establishing an organizational tone on a pair of subjects more important than his usual topics of roster moves and contract negotiations. They were Epstein's most extensive and heartfelt words yet on the domestic violence issue that has engulfed the Cubs in the wake of shortstop Addison Russell's suspension by MLB and his first thoughts about the release of Joe Ricketts' racist and Islamophobic emails that have embarrassed the organization, inflamed tensions and threatened longstanding relationships.

He spoke without notes, without a sheet of talking points and recommended phrases. He chose his words carefully as always but remained conversational and real, sure of himself while admitting all kinds of uncertainties.

Epstein called the Ricketts exchanges "ugly, disgusting views" that were "upsetting to read," and continued to place deeds above commentary in how any response must matter.

He noted that the racism displayed by the billionaire who bought the team was a "major issue" that merits a well-considered and serious response. Epstein seemed genuinely dispirited over the damage done to the standing of the Cubs in the eyes of Muslims and others insulted by Ricketts, noting that baseball is supposed to be connective, the game itself a catalyst for empathy and understanding. When he said this is not what the Cubs stand for, you believed him.

"All fans are welcomed," he said. "Diversity is to be celebrated. Every different background is to be respected. Everybody's welcomed. Everybody in. Now we have a greater burden to show it. I think this organization is up for that. That's something we look forward to doing over the course of this year."

In regard to the Cubs' ongoing handling of Russell, Epstein was clear that the team was following through on his earlier commitment to next steps that were broad and meaningful beyond one player and one series of incidents.

"We took our pledge to become a small part of the solution very seriously," he said. "Experts say you can never say domestic violence will never happen again, but you can still take every step necessary to ensure this is the safest possible workplace so that we have the smallest possible chance of any domestic violence occurring within these walls."

Epstein announced that the Cubs were requiring enhanced training for all employees, establishing regular lines of communications with experts and local domestic violence prevention organizations and making a capital commitment to expand a domestic violence recovery facility. But most importantly, he made a point to say the Cubs are doing all they can to support Melisa Reidy, "who is the victim in all of this."

He also made clear that all options regarding Russell were on the table and that some people he trusts had advised against his current course of action. Epstein used no uncertain terms regarding the tenuous nature of Russell's conditional second chance.

"I personally think we’re doing the right thing," he said. "I understand people who are upset and think we should’ve just moved on. But I can at least pledge to those people that we’re taking this on earnestly, that it’s important to us and that they’re not just words, they’re actions. And I will continue to be transparent with you and with our fans about everything that we’re doing to try to attack this problem of domestic violence and that we will continue to hold Addison to incredibly high standards or he won’t play a regular-season game as a Chicago Cub ever again."

None of this felt canned or rehearsed, like any kind of perfunctory damage control. There was nothing stilted or staged as Epstein responded to direct questions with thoughtful and extensive answers that came not from a focus group or a playbook but from someone who cares about what he and his team stand for regarding matters bigger than baseball. Though chairman Tom Ricketts is scheduled for a similar appearance in the coming days, it's difficult to imagine there is much more he can do to contribute to the healing on both of these fronts. Epstein again proved his worth Tuesday outside of rebuilding the Cubs into World Series winners.

The most powerful antidote so far to the ill will created by a domestic assailant and a racist old coot has proved to be one man with a genuine empathy for others, a desire and ability to learn from the best sources of information and an understanding that talk is cheap.