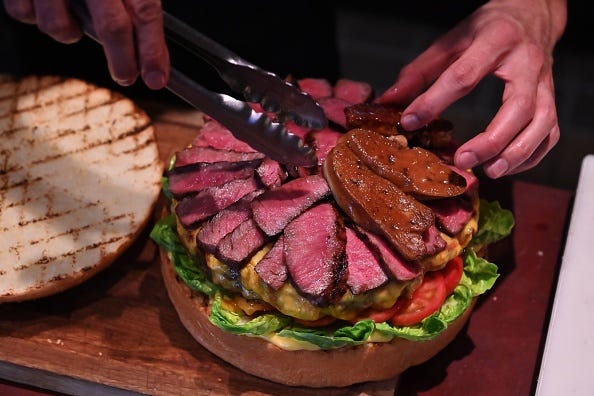 A Japanese hotel wants to raise your cholesterol to new levels by offering up a massive, 6.6-lb. burger in honor of their new emperor. All hail the new burger king!

To celebrate the beginning of the country’s new Reiwa Imperial Era, Tokyo’s Grand Hyatt Hotel has created the "Golden Giant Burger," which, along with over two pounds of beef, comes topped with wagyu steak and foie gras.

Now the Golden Burger is meant to be shared between 6-8 people and does comes with an order of giant fried potatoes and a magnum bottle of Champagne or wine to wash down all those calories. While not the value of a Happy Meal, it does bring the price down to about $112 per person.

And for those watching their waistline, the hotel is also offering a “smaller” regular-size Golden R Burger for $180.  The single serving version comes with everything in the Golden Giant Burger plus goat cheese.

The culinary extravagance is the creation of Patrick Shimada, executive chef at the hotel’s Oak Door restaurant.

“I’m fourth-generation Japanese and being present for the change of the Imperial Era is such an honor,” Shimada said.

“So, I wanted to create something extra special to commemorate the occasion and bring in some of the best ingredients Japan has to offer.”

Japan will officially usher in the Reiwa era on May 1, when Crown Prince Naruhito takes over the throne from Emperor Akihito.

Foodies looking to celebrate this historic event can gorge themselves on the Giant Golden Burger from now until the end of June. Bon appétit & good luck!